Nintendo of America has announced that they're to Publish Dragon Quest VI: Realms of Revelation in the West, taking over publishing duties from developer Square Enix as they did with Dragon Quest IX.

The game has had a rename - it was previously subtitled Realms of Revelation - and it's set to launch in North America in February 2011. It'll arrive in Europe sometime shortly after, though Nintendo Europe hasn't sent down any final details on a European release yet.

Check out the first trailer below, and check out some of the screens of the Japanese version of the game over in the Media Vault! 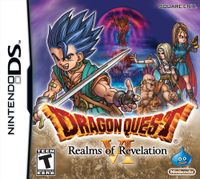