Grounded is a game that's actually actively excited me since it was unveiled. I love it when games have a miniaturized viewpoint, so I knew that despite a fear of spiders and a disdain for early access, I was going to give Grounded a shot as quickly as I could.

Coming away from Grounded, I expect that in a year or two this is absolutely going to be worth playing, but right now it’s not essential. For the curious, it’s worth checking out now, but with the limited objectives and story, it’s more of a proof of concept at the moment. What a proof of concept it is though.

On the surface, Grounded is very similar to other survival action games. You’ll start off with no resources and in an unfamiliar land and be forced to slowly make your way up the resource chain to survive. You’ll start off throwing pebbles, but before long you’ll have a bow you’ve made out of sprigs and armour made out of clover. Each new resource you collect gives you more things to create, and analysing them at research stations provides you with the blueprints necessary for success.

All of this is typical fare for the genre, but there’s the twist of being so small that makes it interesting. You’re cutting down blades of grass rather than trees, and using fibre instead of string. It really is the world and this twist that makes Grounded so entertaining. There’s a lot of fun to be had in finding a discarded Tic-Tac box and being able to mine the mints for resources, and that’s just one of the earlier examples that Grounded is full of. I had to laugh when a friend pointed out that the game measures distance in centimeters rather than metres.

Off the bat, one thing I really liked is the lack of procedural generation within the world. This isn’t a random world like Minecraft, it’s a fully-fledged and intended map that has landmarks and specifically crafted areas. I’m not sure what that means in terms of longevity but for me, it felt good to be present in a world that everyone else was experiencing too.

Ironically, the survival elements are the one thing in Grounded that haven’t quite gelled with me yet. It’s a big part of the game, but I was often so wrapped up in just looking around and exploring that I’d forget about eating and drinking. I’d love to see a bigger focus put on the creation elements.

That’s not going to happen anytime soon though, as there’s not really a story to be had right now. You’ll fight a few bugs off some cables, explore a lab under an oak tree and meet a robot companion, before essentially being told to go do your thing. You can get generic objectives from BURGL, a robotic assistant who plays a role in the story, but beyond that, you’ll mostly just be messing around with the mechanics.

What’s here works though, and some of the features are actually a great addition to the genre. The main one comes with building. Building creates blueprints that show where your creation will go, and allows other players to add their own resources to whatever you’ve put down. The analysis stations are also a really cool touch, allowing players to find out recipes pretty easily but still feel a sense of accomplishment and progress.

Beyond that, Obsidian has done a fantastic job with the game feel. My experience was mostly silky-smooth on PS4 and controlling my character felt like a breeze. It’s genuinely impressive how good Grounded feels right now considering it's in early access, but I loved just running and jumping through the blades of grass like some backyard ninja whilst combat was simplistic and satisfying. The base-building was okay, but I often found it more worthwhile to just create a lean-to and hope that some soldier ants weren't going to attack me in my sleep.

Let’s talk about the big thing in Grounded- the spiders. Yes, they are absolutely terrifying, but it’s done in such a way that even with mild arachnophobia, I can’t help but be impressed. The spiders are the big beasts of the land, and no matter how powerful or prepared you are, seeing them move through the grass is going to shake you up. They’re genuinely powerful too, and I only managed to beat one with a bit of assistance with a stink bug. The arachnophobia mode is appreciated, but I personally didn’t find it worth doing, as it reduces the spiders to formless blobs that are a lot harder to identify and deal with. To only talk about the spiders feels like a disservice to the other fantastic insects on display here, but their presence was genuinely a surprise every time it happened.

The spiders aren’t the only big bugs here though (yes I know they’re technically arachnids, but it’s a good segue so just be cool). Besides a lack of content, Grounded can also be pretty buggy, which is to be expected of early access. I had prompts not working, game crashes, disappearing enemies and all sorts, but none of the issues were ever enough to stop me from playing. It’s definitely leagues ahead of other survival games in the genre in terms of stability, but just be warned going in that it’s certainly not finished.

At the moment, Grounded is definitely worth a few hours of your time just to experience this world that Obsidian have created and mess around with a perspective not often used in games. As much as I enjoy the world and mechanics, I don’t really do too well with making my own objectives and would rather follow some sort of adventure, which this version currently doesn’t have. That's fine though - I’ll be checking in once Grounded has grown some more. 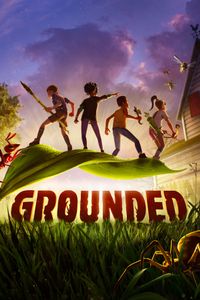