Wasteland 3 Intellgience Skill Points explained: is it worth dumping points into this stat?

In the world of Wasteland 3, some character stats are more obvious than others. Strength and Speed speak for themselves in a game about combat, for instance - but Intellgience is one stat that has seen a significant change from Wasteland 2 - a change which makes it a lot less potent and powerful.

Back in Wasteland 2, just as in many other classic CRPGs, pumping spare stat points into the Intelligence stat conferred bonus Skill Points with each level up. That was really powerful, and meant Intelligence was a great stat to focus your stat points on - but in Wasteland 3, it's not so simple.

If you're looking for a universe-hopping weapon to take out into the Wasteland, check out our page on how to get the Gears Lancer in Wasteland 3. We've also got a full list of the best animal companions and where to get them. 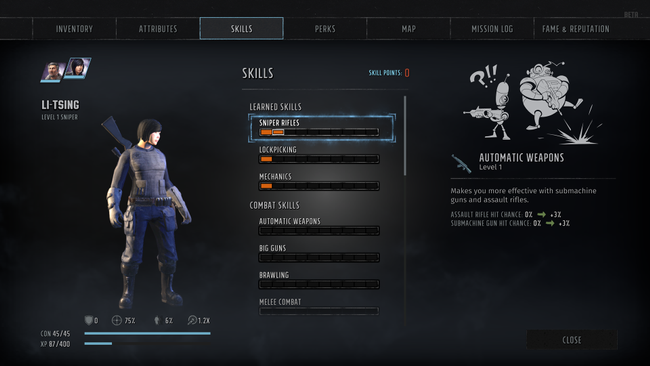 In Wasteland 3, there's still a skill point bonus for the Intelligence stat, but it's limited. The bonus skill points through Intelligence are only given to you once - whenever an even rank is achieved.

That means rather than you getting an Intelligence Skill Point every time you spend a stat point there, the bonus is now only offered with every other stat level. On even stat point levels, you'll get a skill point back - so a 50% rate. That's half what it was in previous games, and half what most CRPG experts will be used to.

We want to be clear that this isn't an error or a bug - it is as designed, something confirmed by the developers of Wasteland 3 on the official forums.

That sort of sucks, but Wasteland 3's Intellgience stat does offer useful bonuses beyond the Skill Points. The Intelligence stat governs your critical chance, crit resistance, status effect resistance of course your Action Points - all major points in the game.

Each rank of the Intelligence stat gives you a rank up - so at the base level, you have a critical chance of 3% and a critical damage of 0.1x - meaning that you deal an additional 10% damage. Level 2 bumps this up to 6% crit chance and a 20% damage boost, plus a skill point.

So this follows down: rank 5 infers a 15% boost to crit chance and 50% crit damage stat, while that's upped to 18% chance and 60% damage plus a bonus intelligence skill point at rank 6.

By the time you reach rank 10, you'll have a whopping 33% critical hit chance and 110% critical damage value - plus another skill point, as 10 is an even number.

This implementation is significantly changed from Wasteland 2 and classic CRPGs, but the Ingelligence Stat is by no means useless. Just keep this change in mind as you spec your character -- no longer is Intelligence an easy path to skill points galore.