Right now, there's more than a little fuss about Mistwalker's Blue Dragon. It's been no big secret that the Xbox 360 hasn't had much of an impact in Japan, and Microsoft truly believes that Blue Dragon is the solution to that problem. They believe that Blue Dragon will attract Japanese gamers to their sleek, white powerhouse enough to ensure an increase in sales figures and improve their reputation with the ever-vital Japanese market.

While Microsoft has a foothold in the two biggest regions -- Europe and America -- they're still not satisfied, and Blue Dragon's release is seen as a whole new beginning for the Xbox 360 in Japan. Indeed, the December 7th Launch Date is seen as more of a re-launch for the console than the release of a much anticipated game.

But what's all this fuss about? Isn't it just another JRPG? I mean, Enchanted Arms didn't change Microsoft's situation with the 360 in Japan, as fun and exclusive as it was at the time. What's so special about Blue Dragon? The answers to much of that lies with who, rather than why...

Blue Dragon's creators include some of the biggest names in videogames, both inside and outside of Japan. Two of the lead game designers were the creators of the legendary SNES RPG Chrono Trigger, while the character design and art can be attributed to Akira Toriyama, creator of Dragon Ball and main illustrator for the hugely popular Dragon Quest series.

Coupled in with the game design and character design legends mentioned, Nobuo Uematsu, the composer responsible for most of the music from the Final Fantasy series has also joined the Blue Dragon team, and is composing all the music for the game.

The game is being produced by the legendary Hironobu Sakaguchi, the mean who originally created the Final Fantasy series, staying with Square-Enix for over a decade, before moving to create his own studio.

The success of this dynamite combination of videogame idols from three of the most popular series in Japan was apparent well before the launch -- on October 19th, 2006, all 10,000 pre-orders for a bundle including an Xbox 360 Core, Blue Dragon, and a limited edition faceplate sold out in a day. In this last week, Blue Dragon scored 37/40 in well-respected Japanese magazine Famitsu -- a very impressive score for an Xbox 360 game.

While the initial reaction to the game is impressive, 10,000 units certainly can't be the end of it -- if sales continue at such an impressive rate in Japan, then Microsoft has certainly achieved what they set out to do with the title, which is prove that with the right games, Japanese gamers will have an interest in their console. If the game is only a small hit that tapers off and doesn't really affect console sales, this spells another false start in Japan for the 360 -- one which Microsoft cannot afford.

Blue Dragon actually serves even more of a purpose than just a door into Japan -- in the west it is a game that hopes to attract the many fans of Final Fantasy and other JRPGs who have remained loyal to Sony thanks to their impressive dominance of the RPG genre with the PS2. While Japanese gamers are definitely the biggest target audience of the game, undoubtedly the localisation will be a very big, important project for Microsoft. If the game turns out to be a big enough hit to meet up to expectations and rival Final Fantasy, then Microsoft is surely on to a winner. Whle the unrealistic, cartoon-like art style isn't quite as appealing to Western gamers, as the largely overlooked Final Fantasy IX proves, excitement for Blue Dragon is certainly not limited to Japan. Trailers of the game stole the show at TGS and X06, and critics and gamers all over the world are excited to hear news from Japan on how the game plays.

This isn't all about bolstering the 360's game line-up with a top-notch Japanese RPG, either. As popular as the genre is, there's one notable technical detail of Blue Dragon that will only fuel the flames that burn in the hearts of fanboys everywhere -- it is the first Xbox 360 game to use more than one disk. Clocking in at a whopping 30 gigabytes, Blue Dragon will come packed onto 3 DVD disks - outright defying Sony's claims that a high-capacity disk is needed to store true next-gen games. After a generation where there were very few -- if any -- games spread across multiple disks, many find the idea of seeing a "Please Insert Disk 2" message disconcerting and not very "next gen."  Blue Dragon will hopefully serve as a reminder that having to change disks once in a while isn't all that bad.

By now I'm sure it's pretty well established in your mind that Blue Dragon is an extremely important game. Firstly, it is the spiritual successor to Sakaguchi's vision of RPGs and the Final Fantasy series, with the art direction of Dragon Quest and fantastic coders who worked on Chrono Trigger. To many people, especially RPG fans, this is as big and as important as a new franchise by Miyamoto or Kojima, and this feeling is only enhanced by the other staff working on the project, like Uematsu.

Second, the game of course is Microsoft's first real try at funding and creating something specifically for the Japanese market. They're not treating this lightly, either, with Blue Dragon II, a manga and an anime all in production in an attempt to take Japan by storm with Final Fantasy XIII two years away. If Microsoft succeeds with Blue Dragon, it could prove a major blow to Sony in many ways -- for example, if Blue Dragon proves success in Japan is possible, many more developers will be willing to release games for the 360, which could have a direct effect on the number of PS3 exclusives. Lack of success in Japan is one of the major reasons there's not many games from Japan for the system.

Similarly, failure on either of these fronts -- if Blue Dragon is bad, or simply fails to make an impact in Japan wouldn't be devastating for Microsoft, but it would certainly prove very disappointing when the company so desperately wants to break into the Japanese market.

Aside from these two major reasons, it's a must-have RPG that might sell systems even in the West, and it's a technical masterpiece with stunning graphics -- a worthy flagship title for the 360, even if it does spread onto multiple disks. In terms of helping to shape the gaming landscape for the next generation as it begins, Blue Dragon is a notably important title -- there is far more at stake here than there was with Twilight Princess or any other big 2006 game... and even far more than an upcoming 2007 blockbuster such as Halo 3. Blue Dragon is definitely one to watch, because it could kick-start the Xbox 360 revolution in Japan. Just maybe.

Check out all our Blue Dragon Screens in our Media Vault

Liked this Article?Digg It!
Advertisement. Keep scrolling for more
Post to TwitterPost to FacebookPost to RedditPost to Tumblr
Enjoyed this article? Share it! 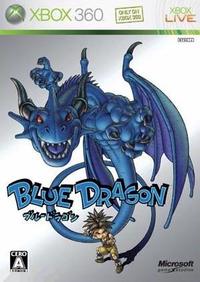