Torment: Tides of Numenera could be the secret great RPG of 2017

The early half of 2017 is packed with tons of titles that RPG enthusiasts have their calendars circled for. Persona 5 is making perhaps the largest splash in April, Dragon Quest VIII is releasing on 3DS. You've got a new Kingdom Hearts and old Kingdom Hearts, Tales of Berseria, Platinum's take on Nier, Ni-Oh, Digimon, Horizon: Zero Dawn, and even a PC release for Disgaea 2. Phew.

But please don't sleep on Torment: Tides of Numenera. If you've got any space left. Or days on your calendar.

Perhaps you are like me and you've heard whisperings of a new game in the Torment now-franchise. Maybe you've played Planescape: Torment and you've been following the title since the initial Kickstarter campaign got funded in March 2013. (We'll forgive the estimated delivery date of December 2014) and have already made a pledge. Maybe you've played some of the stellar entries in the genre in recent years such as Larian's Divinity Original Sin, or Obsidian's Pillars of Eternity, or even the recently released Tyranny and you're looking for the next thing in line. Or maybe you have no idea at all what to think of  Tides of Numenera. I'm here to help you get caught up. 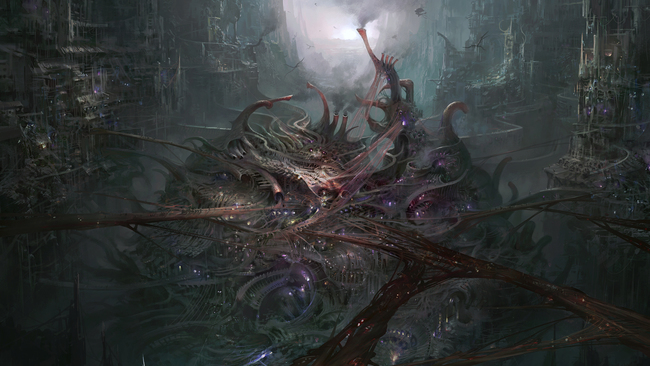 What is Torment: Tides of Numenera, and Why Should You be Excited:

Specifically, the player will take the role of the Last Castoff, who is a human that was once inhabited by some unknown powerful being, but was suddenly abandoned and left without memory of prior events.

Sounds pretty neat, all told. If that wasn't enough, lets take a look at the talent behind this game: Chris Avellone, Colin McComb, George Ziets, and Brian Fargo. That's over a cumulative 80 years of history producing similar games like Planescape Torment, Fallout, Fallout 2, Icewind Dale, Neverwinter Nights 2, Knights of the Old Republic 2: The Sith Lords,  Pillars of Eternity, and Fallout:New Vegas. That's quite the resume. With a portfolio like that, who wouldn't be eager to see what that talent could do with the freedom provided to them through avenues such as Kickstarter.

So, What is Torment? 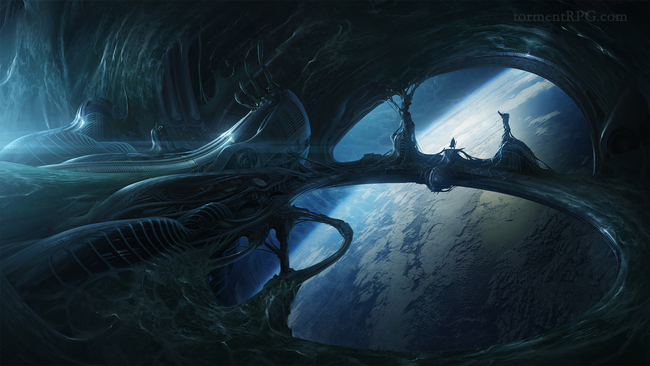 While Tides of Numenera is being built on Unity, the same engine that powers Pillars of Eternity and Tyranny, Planescape: Torment was released in 1999 on Bioware's Infinity Engine. which is most widely known for being the backbone of the critically successful Baldur's Gate series of games. The Unity engine hasn't had a flawless track record, but games such as Pillars show that it can work alright for similar titles.

From the outset of Planescape: Torment's development, the designers at then Black Isle Studios intended to challenge what was typically expended in a fantasy RPG:  that is, the game was not to feature dragons, orcs, elves, goblins, or many other fantasy races. In addition to that, Planescape:Torment was to stand in opposition to the tendency for RPGs to have a "correct" approach to undertaking the game's story and quests. Having the altruistic "moral" choice leading to generally the best possible outcome was thought to be far too predictable, a concern even many modern games struggle with sometimes, and the designers wished to make a game with greater moral ambiguity. So did the designers succeed?

Well, Planescape:Torment was named RPG of the Year for 1999 by GameSpot and Computer Gaming World, GameSpy added it to their Hall of Fame, and in 2005 GameSpot declared it one of the greatest games of all time. In addition, IGN recalled that playing Planescape: Torment "had their ideas of what an RPG is completely revamped after playing". Seems like it did pretty well.

If Tides of Numenara could come close to matching that sort of design philosophy and reception, then consider my calendar marked. A short preview of the game's progress was shared with Kotaku at Pax West this year, which seems to indicate that Tides of Numenera continues to walk its own path rather than fall into traditional RPG trappings. The designers mentioned in passing some of the crazy situations that Torment players could potentially find themselves in, such as: dying in order to interrogate the ghosts in the player's mind, entering someone’s else's memories to change their actual past, and helping a giant robot give birth. Wicked. So if Tides of Numenera is setting out to have a similar focus all while being helmed by much of the same talent, it's worth paying attention to.

But this is Numenera, Not Planescape?

Numenera is set roughly a billion years into the future. To put that into context, reminder that the dinosaurs died out only 65 million years ago. The world in Numenera is known as "The Ninth World", referencing that eight great civilizations have risen and fallen before the world of the current era. Specifically, Numenera refers to the leftover remains of technology that lies dormant from these past civilizations.  The world is inhabited by "nanites" (believed to be some sort of divine presence) that some characters in this universe can communicate with and even control.

Sounds like a pretty great universe for some great game creators to get creative in.

Sounds Cool, When and Where Can I Play It? (Answer: In Early Access Now!) 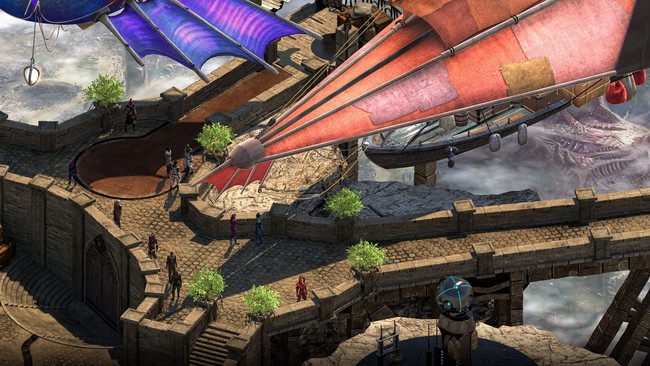 inXile Entertainment has stated that Torment: Tides of Numenera will release in "Early 2017", though they have not given a specific release date. The game will be available DRM-free at gog.com, and actually is available in Early Access over at Steam. Early access players will have access to the first chapter of the game, though it has not been decided if progress from the early access period will wipe or persist upon final release of the game, or how many chapters the full title will have. The precedent for this working well with similar titles is already in place with the success of Divinity: Original Sin, which won RPGSite's 2014 RPG of the Year, and is a tool Larian is returning to for that title's sequel. If Tides of Numenara ends up similar in quality, we may just have another award-winning title on our hands. 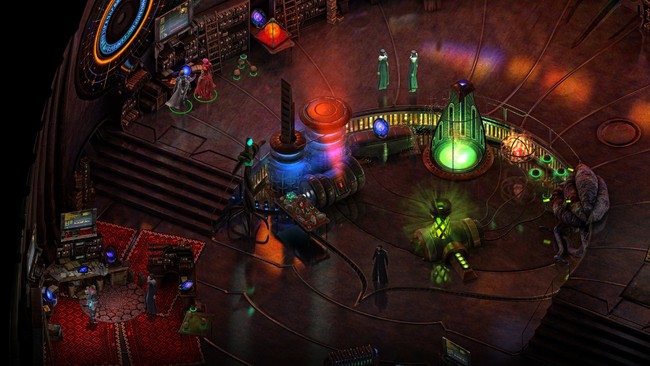 You can even purchase directly from the game's official site, with the opportunity to gain a lot of bonus digital and physical goods with purchase of the base game. There is also an interesting (though mildly confusing) method for paying what you want in order to select the features and extras you are interested in, a la carte, including physical products from the Numenera table top game. (Note that it seems like the official game website only accepts Paypal). Interestingly enough, the digital copy of the game here alone is 3,500 inXile points, or 35 dollars. 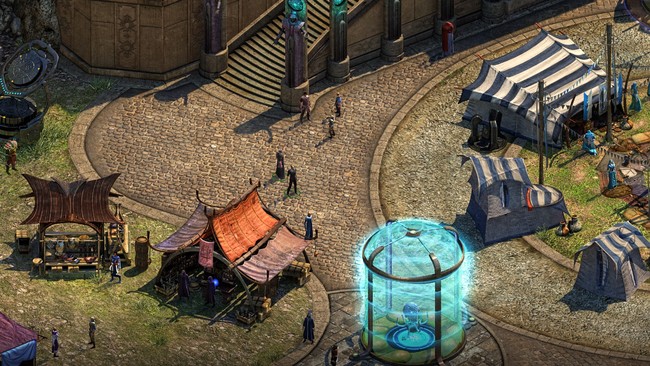 Actually, no! While inXile Entertainment originally envisioned the game as a PC-only title, the partnership with Techland Publishing announced in August 2016 that Torment: Tides of Numenara will also be on Playstation 4 and Xbox One. With Wasteland 2 already on inXile's resume, it's safe to believe that the console port of Torment: Tides of Numenera will faithfully present the pc-rpg to that audience.

That announcement also came with a gameplay trailer along with some stellar music:

So whether you've always been interested in this successor to the 1999 cult classic or if your interest has only recently been piqued, stay tuned for more news and information as launch details become finalized.