Ultimate Weapons are something of a fine Final Fantasy tradition. For me the ultimate weapon is best personified in Cloud's bright, glowing Ultima Weapon from FF7, but every fan likely has a different favorite, with a wide variety of weapons available across the different FF games.

Noctis' signature weapon is the Engine Blade, and this is a weapon you'll have when you start the game. It can be upgraded, however - and given this has been Noct's signature arm right since the Versus XIII days it's only appropriate that his ultimate weapon, Ultima Blade, is merely an upgraded Engine Blade.

This is arguably one of the best if not outright the best weapon Noctis can equip in the game - and it keeps that iconic Versus XIII look. Here's how to get it. 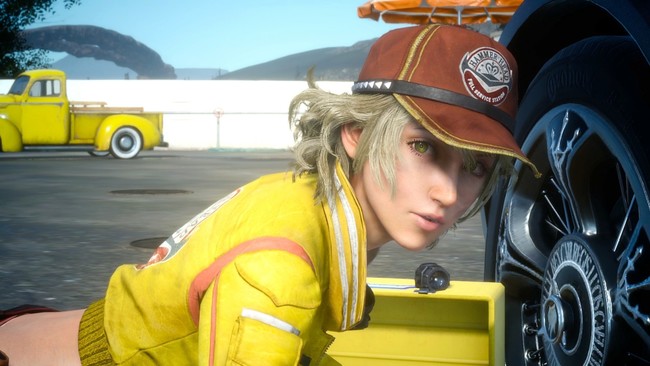 How to upgrade Noctis' signature sword: A Better Engine Blade

You'll be able to start upgrading pretty early on - as soon as you start Chapter 2 you'll be able to talk to Cid. Cid can be found outside Hammerhead Garage for most of the game, though keep in mind later he moves briefly to Cape Caem. You're going to be returning to Cid a lot.

Once you talk to Cid it'll kick off the quest 'Cid Sophiar, Master Mechanic'. This isn't just one quest but an absolute slew of them: each a quest to upgrade a different weapon in the game. For this sword we're looking for these three quests, which will unlock sequentially:

All you need to do here is find the items requested and trade it in with Cid. He'll then upgrade your sword and cash the quest in for an EXP bonus too.

A Better Engine Blade: use a rusted bit to upgrade Noct's sword

The first quest in the line is available as one of the first quests from Cid once you talk to him about weapon upgrading.

This time around he'll require a 'Rusted Bit' - this is a common upgrade item that you'll find on your adventures. These are actually really common - head down into dungeons and the like and they'll show up regularly.

A Better Engine Blade II: use a glass gemstone to upgrade

The second quest in the line will become available after you've completed the previous quest and obtained the Engine Blade II.

This time Cid will require a Glass Gemstone. This is another fairly common collectable you'll find out in the world, though it is slightly rarer than the rusted bit.

The Engine Blade III is your reward once you turn the gemstone over to Cid. It has 134 Attack, +3 critical, +25 MP and +18 magic. It'll be ready after you've completed one quest or hunt.

A Better Engine Blade III: get Noctis' Ultima Blade with a Sturdy Helixhorn

The third quest will unlock so long as you've competed the previous quest and got the Engine Blade III in for the bargain. This is the big one now - ultimate weapon!

Cid needs a Sturdy Helixhorn to upgrade this weapon to its top form. This item is not a standard drop.

Hand this in to Cid and he'll give you 1000 EXP and get to work on upgrading to the Ultima Blade, the ultimate weapon for Noctis.

If Cid seems to be taking a while crafting the blade, undertake the very first hunt at Hammerhead and repeat it about 5 times. Then rest at the trailer and Cid should givve you a call.