Mass Effect: Andromeda is pretty damn close, and how close it is has left us a little... well, worried. The game is almost out and we've barely heard anything, so when EA finally gave us a call and asked us if we wanted to come and play the game we of course snapped their arm off.

Here's the good, short news: a little over three hours with Andromeda greatly reassured us that EA hasn't got anything to hide with its weirdly reticent marketing strategy - the game actually feels pretty damn good and seems to have some interesting, fresh new ideas for the series while remaining absolutely true to what people loved most about the trilogy. Also, no: it's not Inquisition in space.

You can find me nattering over some gameplay footage (provided by EA - they didn't let us record our own) - below. Then more words!

What's most interesting about Andromeda to me is the core concept of providing a Mass Effect experience based on a few key things: the sense of discovery, world building and RPG systems from the first game, the story and character strength of the second, combat rooted in the frantic encounters of the third and its multiplayer, and finally a new flavor designed to draw in all-new fans who've never played a Mass Effect game before.

Each is represented often. Fans will immediately recognize the shape of shuttles and ships in the opening stinger as Mass Effect, and they'll also recognize the opening text crawl that was established in the first game and became tradition. When the game's title appears, however, the focus is clear: Andromeda. The words 'Mass Effect' fade up afterwards; this is a clean break. 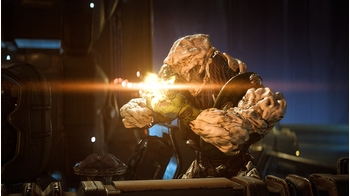 In a nice touch, before you get to know them your enemy are simply marked on your HUD as 'unknown'.

Such of the opening feels like this, flitting back and forth through familiar references such as passing character chatter call-outs to the Geth and Medi-gel mingled with all-new things that both newcomers and fans will be discovering for the first time. The first time I ran out of ammo I was stressed, but then I smiled: Andromeda might still have heat clips rather than overheating guns, but the noise a gun makes when it's completely depleted ammo will be all too familiar to ME1 fans who used to hold down the trigger just a little too long.

When you make first contact with an alien species the moment is surprisingly organic - it's up to you if you pull the trigger to draw your weapon before approaching or if you approach trying to be friendly. Characters will note this decision, of course, as Mass Effect's branching story features are as present as ever.

One interesting shift there is to get rid of Paragon and Renegade, something which Bioware argued in a presentation was a hang-up from the series' roots. Rather than 'nasty and nice' options with some stuff in between, your choices in conversation now take on different tones - your Ryder might be professional, emotional, sarcastic or a range of other emotions in a given situation rather than simply kind or cruel. It's an interesting change, and one of the better things Mass Effect can borrow from Dragon Age. In loyalty quests and the like, characters will face off against each other, and it sounds like there'll be less catch-all solutions to every problem simply by passing a speech check: you'll be forced to make hard decisions and occasionally lose.

The important thing is that the game feels right, however, and it does. It is true to Mass Effect.

We already explained how RPG mechanics for character progression work after freeze-framing a trailer back in January like the nerds we are, but after a hands-on we can report our hypothesis was right: go read that post.

Traditional class choice at the top of the game is gone, but instead is replaced with on-the-fly switching between classes you've unlocked complete with bonuses and stat boosts. Classes are unlocked by investing into powers associated with them, meaning it's a broader and more open character progression than simply going down a set path with a handful of skills as in the previous Mass Effect sequels.

We approve of all this, obviously, though one thing that isn't clear is how well this will all hold up over the course of a much longer game. This will be an area of focus for us in our review, and we're looking forward to seeing what kinds of character builds we can spec out with the final game - there wasn't really time in the preview. 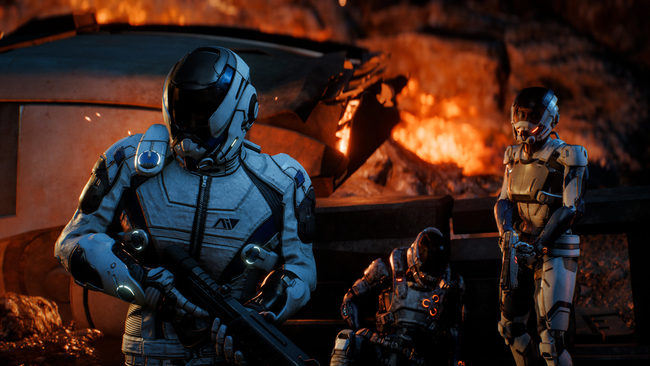 One area that seems particularly promising for role playing are the game's zones: they're absolutely massive. Far bigger than anything Mass Effect has attempted before, there seems to be a lot to find off the beaten path and opportunity for some beautiful, striking vistas that extend on for miles. This is paired with fast-paced travel in the Nomad, the new replacement for the Mako that we can happily say isn't a nightmare to use - another victory. The Nomad cleverly has two drive modes - one for speed and one for climbing unsteady terrain - and you switch between the two as needed, allowing for rapid travel across the truly massive zones.

The idea, Bioware explained in a presentation, is to have less worlds but have each feel more unique than the randomly-generated worlds in Mass Effect and larger than the shorter but more plentiful story missions in ME2 and 3. If you imagine ME1's story planets, Andromeda goes for that sort of design but on a way larger scale.

There are still areas where we're concerned, of course. The sheer size of the zones could backfire, Dragon Age Inquisition style, and while the game looks amazing when you look at it from the 'big picture' perspective - the world, the atmosphere - close-ups of some things crumble a little, especially some of the facial animation. This is a familiar problem in Mass Effect, and it seems to be persisting in Andromeda. 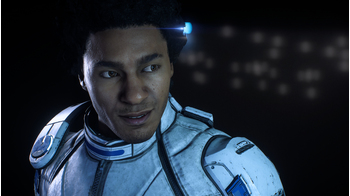 Liam is the squadmate that's been singled out by some fans as 'boring looking', but he's a charmer. He's no Jacob, that's for sure.

The important thing is that the game feels right, however, and it does. It is true to Mass Effect. The combat is slick and exhilarating, with the new jump jets a brilliant addition to give combat a more fast-paced edge.

What makes it work are combinations - like how Mass Effect has in the past typically been best when powers are combined together in interesting ways, Andromeda's combat seems best when the new cover system (it's now dynamic, not snap-in), powers, jump jets and even terrain (I fought in areas where certain wet ground was poisonous and so on) are used together to create a satisfying encounter. It seems to be working - apart from how long it took the game to get me off a pistol to something a little more fierce in the opening I loved the combat I've experienced so far.

Most important to get right for my money are the characters, and Andromeda seems to have things set there, though this is another area difficult to judge on a slim slice of the game. Your father, an N7, tears through people in mission one and it's hard not to wonder if he and Shepherd knew each other. He leaves an impression. The others I meet are fun and interesting. Second-in-command Cora gives off a sort of less-stuck-up Miranda vibe but I'm certain there's more to her than meets the eye. Liam is a combat medic of sorts, a Brit with a cocky attitude. When I say getting angry is a good thing on a mission, he responds by letting off a few rounds into an enemy corpse. He's that type.

Up on the Tempest, Salarian pilot Kallo Jath has some interesting words to say about his life before heading to Andromeda and his role in creating your gorgeous new ship. There's a lot of time to breathe here: people to talk to with fully-fledged conversations are everywhere, each with unique information. I get the impression the days of overhearing quests and turning them in to characters you never get to know are behind us. Your ship doctor is an Asari named Lexi, voiced by Game of Thrones' Natalie Dormer. There is, of course, a Scot abroad the ship to fill that Star Trek inspired quota. It feels fleshed out. More than anything, it feels exciting: that sense of discovery on the very first Normandy is back again. Everything old is new again.

It still feels like Mass Effect and it's definitely a 'more of the same' sequel than an outright reinvention, but Mass Effect Andromeda seems like it'll be a winner. We're a month out and are now absolutely pumped to get stuck in for our review - but these first few hours are a solid start indeed.