Marvel Heroes Omega Tips & Tricks for beginners in the PS4, Xbox One and PC MMO

If you like a good old fashioned loot RPG and you've never played Marvel Heroes, you may well be missing out. When the game launched back in 2013 it was a bit of an iffy thing, but several years later it's had major patches and some serious iteration that's basically turned it into a whole new game - as you'd expect from any worthy MMO.

Marvel Heroes is now on PS4 and Xbox One as Marvel Heroes Omega, while the PC version of the game also has a new lease of life under a new name and a new release. There's a lot to digest in this game if you're just trying it out, however - there's a story mode, a shed load of characters, level caps at level 10 and level 60, unlockable skills, a prestige mechanic and of course loot - there's a lot of loot.

The game really is rather interesting and a great little time killing RPG, but it can be a little daunting to get into despite the best efforts of the developers to streamline this free-to-play experience over the years.

To try to clear things up a little we've gathered up together some of our top tips and tricks for beginners in Marvel Heroes Omega below - and these tips are relevant for PC and console players alike, so you'll be at home no matter which version of the game you're on. Enjoy! 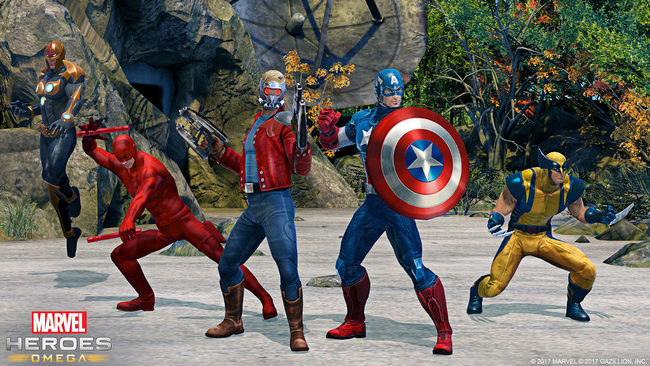 Some new players get a little confused about this, and so it makes sense to repeat as a basic thing to start off with: all starting heroes are available up until level 10. This is a free-to-play game, and this is the free-to-play chunk at its most clear: level 1-10 with any of the starting heroes is capped at level 10 - once you hit level 10, you won't be able to progress.

Level 10 is of course just the start of the character progression in Marvel Heroes, with major gameplay mechanics unlocking as late as level 60. In order to hit level 11 and beyond, you'll want to buy a character.

This can either be done with real cash or with Eternity Splinters, which are rare items that drop from enemies. The prices range greatly, but characters will sometimes be on sale and not all characters will be priced the same. You can either save up your splinters for the character you want or drop some real cash - the game was free to get in the first place, after all.

As a handy reminder, characters that you own will have a green experience bar under their portrait in your roster tab. Any unlocked characters with a red exp bar are ones you can play until level 10.

Gear in Marvel Heroes Omega follows the pretty standard loot coloring scheme that you find in many RPGs, but just in case you're newer to the genre, it's important to remember these colors and the order they come in - this is the fastest way to tell at-a-glance how worthwhile a new piece of loot that's dropped is.

In order of rarity from common to the most rare, the gear color table is as follows:

Study characters and find the best skill combos and talents for you, then aim to make the best build around that

With Captain America, for instance, his Shield Toss move leads great into his Airborne Assault move. Shield toss stuns enemies in a straight line, while Airborne Assault will deal a great deal of damage to those trapped enemies and also get you get in close to follow up even more. This is just one example, but every character has similar skills.

Be sure to experiment with skills for each character, and don't be afraid to respec to rebuy your skills if you need to.

Once you hit level 32 you'll have the right to access Talents, another layer of skills that offer passive boosts to your character. There are far less talents, but the impact your choice will have on gameplay is significant. Think about your talent choice carefully, and again, don't be afraid to respec. 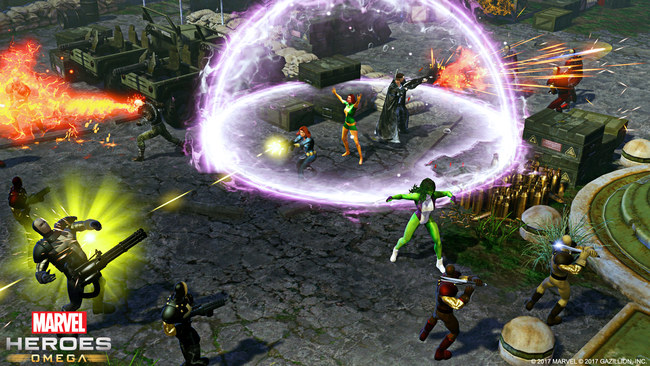 Once you pick the best character for you, prioritise clearing the Marvel Heroes story to level up fast and reach the endgame content

Once you've finished the tutorial, you might end up feeling a little overwhelmed with all the content that's before you. Try not to be - once the tutorial is done, there's really only one thing you should do, and that's complete the main story mode of the game.

The story of Marvel Heroes Omega is pretty cool in general and well worth seeing, but also completion of the story is the fastest way to hit level 60 and unlock the really exciting content that crops up at the high end of the game.

You won't need to pair up with other players to reliably complete the story - so grind on that main plot content to begin with, since you'll want to get at least one character to level 60 as soon as possible.

While completing the story has talked about in the previous point, you need to be aware that story progression does rely on a bit of grinding outside of the story content. If you only do the story content you'll eventually hit a brick wall in the form of difficult enemies that are leveled beyond your ability.

The key to this is to know when  to step away. Once the enemies in story mode feel like they aren't going down quickly enough, you should back out of the story mode and head into the patrols such as Midtown Manhattan. These areas are instanced zones where you and other players will be able to take on a constantly rotating set of challenges, with supervillains and other boss characters spawning regularly for you to take down.

By taking on these areas and the super heroic trials, you'll be able to grind out the levels needed to make story mode manageable again. Pop EXP bonus items if you have any, tackle the hardest difficulty you can and don't forget heroic trials, which can be completed to unlock the heroic difficulty patrols. Use this to break up story content and boost your level to speed up your story completion.

While you'll end up with a lot of unwanted loot in Marvel Heroes, you shouldn't just sell this stuff, as tempting as it is. Instead, you can donate it to vendor characters in the hub to level them up.

Higher level vendors will have better stuff for you, and it takes quite a long time and quite a lot of items to level them up - so start early. The better the item, the more vendor EXP it'll be worth.

The maximum rank for vendors is level 20, and there are engineer, logistical and science vendors all with unique levels and unique functions. Vendors show up ion multiple locations throughout the game, but the vendor level for each type of vendor is universal across all of them.

Save your legendary items and artifacts, even if you can't use them yet

Early on in the game if you get lucky you'll find that you begin to get drops of legendary items and artifacts you'ret not yet able to use. You should hold onto these if you can, even though storage space in Marvel Heroes Omega comes at a premium and actually costs real money to expand. If you have to toss/donate some, decide which to get rid of carefully.

Lendary items won't be entirely useful until you can begin leveling them up and that won't happen until you finish the story mode - this is the long game, but it's worth keeping in mind.

Once you hit level 10, you'll be able to use fast movement to sprint and generally move a lot quicker - a universal, character agnostic upgrade that can be missed all too easily. On console this is done by holding the right trigger or clicking in the left stick.

If you do need money and are short because you're donating all your items to vendors as we described above, consider equipping a medallion in order to boost your gains. The best option for this is a Kingpin Medallion, which drops in Chapter 4 of the story inside Fisk Tower - just defeat Kingpin to get it to drop. This will give a decent bonus to your credits earned in general.

Hold on to those boost items and use them carefully

Boost items are a seriously major part of Marvel Heroes Omega and are a great way to level up quickly - but you should use them carefully. Marvel Heroes often has events that offer natural EXP bonuses in certain areas, and boosts are often best used in conjunction with such events to boost your characters even more quickly still.

Remember, too, that there are EXP boost catalyst items - these are great for leveling characters early on, especially for your second or third (or later) characters. These can also be combined with boosts, and drop in Midtown Manhattan Patrol. 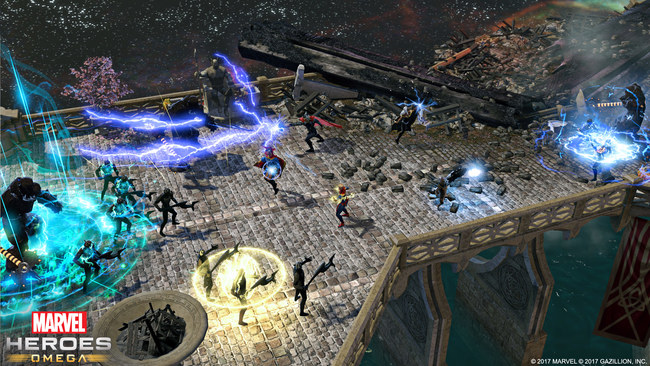 The term prestige is one that's pretty common in level-based games, from Call of Duty multiplayer through to Marvel Heroes' level system. In Marvel Heroes Omega 'going prestige' does exactly what you'd expect based on other games - it resets a character to level one, allowing you to rebuild that character from scratch.

You can prestige up to five times, and each time you prestige you'll gain a new color name tag, something which can be used to showcase just how much of an experienced player you are. The prestige player name tag colors go as follows:

You'll also be rewarded a flourish item for prestiging - this lets you do a 'spray' of the flourish on the ground, or activate another character effect.

Before you prestige, you should make sure you gear up your character as much as possible and aim for cosmic gear.

As mentioned above in our level 10 explanation, Eternity Splinters are the currency you can use in-game to buy new characters, something pretty vital for expanding your Marvel Heroes character.

Naturally, you're going to want to earn some - but be warned that while the game gives you some Marvel Heroes is also keen to get you to spend a few dollars, and as a result it isn't hugely generous. Aside from buying them, here's a few ways you can get some:

The Surge 2 announced for PS4, Xbox One, and PC

DONTNOD's Twin Mirror announced for PS4, Xbox One, and PC

Vampyr arrives on PS4, Xbox One, and PC in June 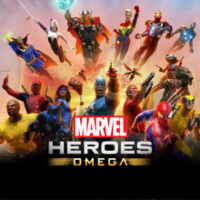