Skyrim Amiibo Unlocks: How to get Zelda's Master Sword, Hylian Shield and Champion's Tunic with and without amiibo

The Elder Scrolls V: Skyrim is finally arriving on the Nintendo Switch, and with it comes a cool new addition to the land of Tamriel - special chests containing items from The Legend of Zelda, a special collaboration between Skyrim on Switch and Breath of the Wild, the absolutely amazing Zelda entry that launched alongside the Switch.

There are three new Zelda-themed items available to you in the world of Skyrim on Switch - the Master Sword, the Hylian Shield and the Champion Tunic. The former pair are of course famous from the whole Zelda series and come in this game in the designs they took on pretty much uninterrupted from Ocarina of Time on, while the Champion Tunic is the blue gear worn by Link and the other Champions in Breath of the Wild.

They're cool pieces of gear! In Skyrim terms, the Master Sword is a one-handed sword, the Hylian Shield is a standard-issue shield and the Champion Tunic is Light Armor. For a small cost, all three can be upgraded as with any other weapon. 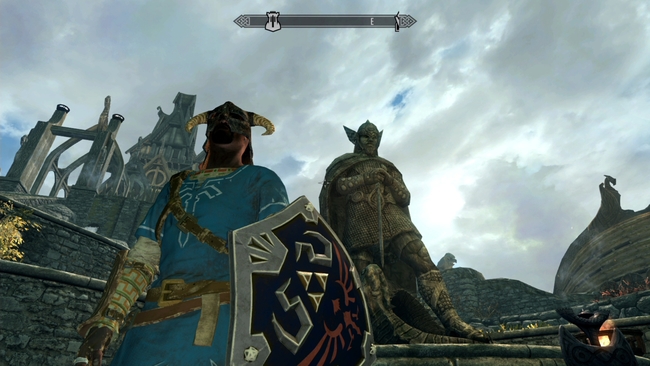 How to get Zelda's Master Sword, Hylian Shield & Champion Tunic in Skyrim for Switch

If you want to get your hands on the Master Sword, Hylian Shield and Champion Tunic in your play-through of Skyrim on the Switch you'll have two different options to pursue that goal. Nintendo has a general policy that all content in a game must be unlockable for free - and so though Skyrim's Zelda-themed gear is available via amiibo, there is a non-amiibo method you can use to unlock this gear. First, though, let's talk about getting your hands on this Zelda loot with amiibo...

In order to get your hands on the Zelda items you'll need to break out your Zelda amiibo and scan it - but the option for this is a bit hidden away and is easily missed. I spent a while combing through settings menus assuming I'd have to turn it on like in Breath of the Wild, but the amiibo option is actually unlocked from you right from the moment Skyrim gives you the freedom to do what you want and unleashes you on its massive open world.

In order to find the option you need, open up the Skyrim main menu with a press of the B button on the Switch controller. In there, you'll want to look in the magic menu (that's to the left) - within that menu there's a subheading called powers, and under powers you'll find an all-new power for Skyrim on the Switch - the amiibo power. This is your path to those hot Zelda items. 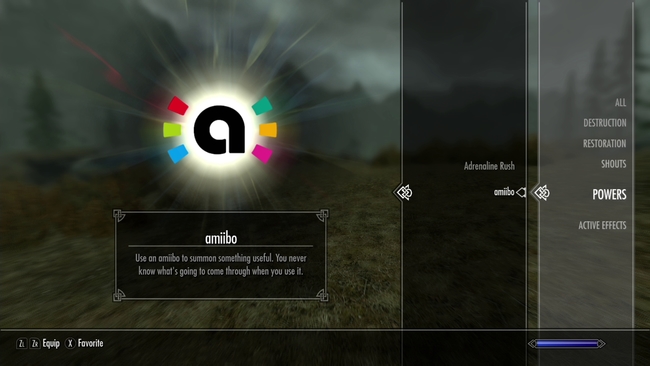 The amiibo power is used like a shout and other passive spells - so simply tap R (the right bumper or R1) on your Switch to activate it. This is where things get a bit complicated, however. Here's some points to be aware of:

You'll know when Skyrim is ready for your amiibo, as a big golden circle will appear on the ground - this is where the chest will drop. When you're ready, scan that amiibo. Some notes on what happens next:

To be clear, all amiibo are compatible with Skyrim on Switch, and which amiibo you scan will result in slightly different rewards outside the special Zelda-themed items.

As a note, non-Zelda amiibo such as Mario, Sonic, Animal Crossing and so on will only spawn random items in their chests with no chance for the Zelda-themed gear. Any Zelda amiibo carries this 20% chance, however - they can be from the Smash Bros, 30th Anniversary, Twilight Princess or Breath of the Wild ranges - all Zelda characters carry the same chance to get these items. 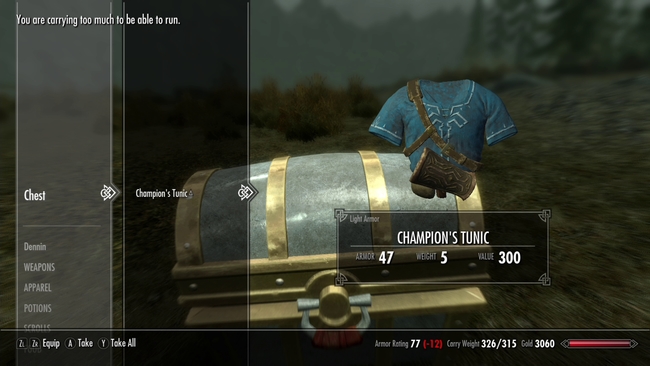 If you don't own amiibo or don't want to use them as you feel like they skirt a bit close to cheating, Nintendo and Bethesda also have you covered there, since Link's famous items can all also be found in a single chest out in the world - though you'll have to travel to one of the most inhospitable locales in Skyrim to get your hands on the Master Sword, Hylian Shield and Champion Tunic.

The chest containing the Zelda items naturally is found at the top of The Throat of the World location - the highest mountain in Skyrim and indeed in the whole of Tamriel. The game will naturally bring you to this location eventually, but you can absolutely head there earlier if you so wish.

The Throat of the World is a challenging area full of strong enemies however including a Skeletal Dragon, Frost Trolls, Ice Wraiths, BEars and Sabre Cats, so you'll want to be prepared and travel with caution. Level 10 and up should be able to manage it reasonably, but the higher your level the better. 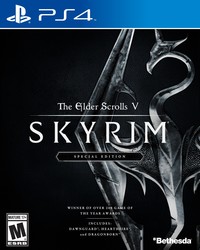