Monster Hunter World Lumps of Meat: finding and dealing with the meat in the 'The Meat of the Matter' quest

Monster Hunter World features a lot of little nods and a huge number of objectives as you head out into the game's various zones, and some stand out more than others. One of the stranger objectives involves Lumps of Meat, and this particular key item shows up in the five-star quest "The Meat of the Matter" in the Rotten Vale.

But what's the best way to complete your objective of transporting the meat to your objective to scoop up the reward? Well, let's get into that - first off with an image of the location of the Lumps of Meat in the Rotten Vale area of Monster Hunter World:

Survival in the Rotten Vale can be a struggle, but our guides will make it easier: 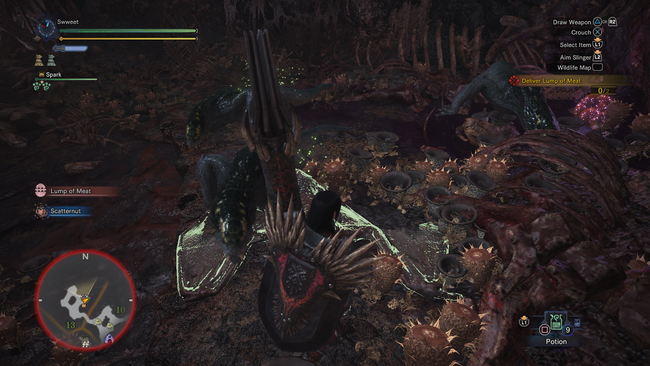 Lumps of Meat: how to deliver meat for the Meat of the Matter quest in Monster Hunter World

Right - you know how we called this a transport quest earlier on? Well, that refers to a specific type of quest in Monster Hunter World - a quest most widely associated with Wyvern Eggs and Herbivore Eggs. These egg quests require you steal an egg from the monsters it belongs to, but the quest is difficult because when you nab the egg the monsters go wild and try to chase you down. Although Lumps of Meat are obviously not an egg, for the purposes of Monster Hunter they shall be treated exactly the same - your goal is to steal them and spirit each Lump of Meat away from the monsters guarding them.

If you're planning to tackle the 5-star quest "The Meat of the Matter", you can find your desired carrion in Area 13, as pictured above. It should be a relatively pain-free task as long as you have already discovered the Central Camp in Area 11. It's a short distance from where you can deliver your meat to the camp, and should make gathering the lumps a breeze!

If you're having trouble with this quest or any other transport quests, another important tip would be to craft the Kulu Ya Ku's "Kulu Vambraces" all versions of the armor piece in both Low Rank and High Rank come with Pro Transporter, which increases your running speed while transporting items and helps protect against dropping them! This armor piece is an absolute must if you're having any difficulty finishing these quests.

Monster Hunter: World to have a new collaboration with The Witcher 3 in early 2019

A brief chat with the developers of Monster Hunter World

Monster Hunter World Iceborne Hot Spring Stone: How to Complete the "Treasure in the Steam" Quest