From a little hands-off demo alone, Shenmue 3 seems more of a RPG than the previous entries

RPG Site's coverage of the Shenmue series has always been a little on the side of stretching. Like our coverage of visual novels, Zelda or even Dissidia Final Fantasy, our reason for covering it has always been that it's the sort of game we know fans of more traditional RPGs tend to love even if it doesn't technically fit the definition. With Shenmue III, however, our coverage actually looks like it'll be fully justified.

Don't get me wrong: Shenmue has always had an RPG-like edge. The adventure game side of Shenmue, where you immerse yourself in a world, explore, take on jobs, meet and befriend new characters - that always felt very RPG. That side of the game is why Shenmue began life as the aptly-titled 'Virtua Fighter RPG', but the series was always low on more traditional RPG mechanics around its combat encounters. That's all changing in the latest, crowd-funded entry, which we got to see a short private demo of - a short fifteen-minute guided tour with Shenmue creator Yu Suzuki himself.

Training has always been a part of Shenmue, but in the first two entries training felt less distinctly like a growth mechanic. It was a way to kill time, and though it would unlock improvements over time, the impact was less obvious and less profound. In Shenmue III training takes on a more RPG-like status, with the aim to level up Ryo's moves, as well as certain aspects of Ryo himself.

In Shenmue III, Ryo will have access to all of his moves from the previous two games plus new ones, and each move can be leveled up individually up to a level cap of 10. As moves level up, they become stronger and slicker - during the hands-off demo I saw, Shenmue creator and director Yu Suzuki suggested a level 10 move will be roughly double the effectiveness of the same move at level 1.

Often that difference will be visible in Ryo himself, too. The training session for the one-inch punch move sees Ryo repeatedly punching a log. It's a timing exercise: players must hit the command for the move in a certain window. As they succeed, the move gains experience points and levels up. With each successive level up, Ryo's movements become more expert; in the case of the one-inch punch, he requires less of a wind-up, the distance from neutral to punch becoming shorter and shorter, ever closer to that Bruce Lee ideal.

There'll be different types of training out in the world, too. Some will be aggressive and involve practising a move repeatedly, some will be endurance-based, and others still will be timing-based. It's part of a more realistic representation of martial arts training in general - so there's a lot of repetition, which fits into Shenmue's themes of time management, possessing the freedom to do what you want and realism. The story side of Shenmue means thematically this chapter of the story will in part be about Ryo 'grinding' to train his martial arts skills, but the time management aspect of the game also means your ability to grind will be limited.

Each training session is a mini-game, essentially, but each mini-game exists not just to level up the move but also to teach you its command and how to use it - Shenmue's combat still plays like a Virtua Fighter. If the fighting game inputs stress you out, there's also an 'automatic' mode that makes things simpler.

Beyond leveling up actual moves there are also wider experience gains when you finish training and fights, leveling up different elements of Ryo. All of this mostly seems as though it'll be limited to combat, leaving the adventure side of the game untouched - though admittedly this was a very limited-scope demo.

Over in that adventure side, it's all familiar, but with an increased scope if not the cutting edge visual flair previous entries in the series had. The small town I saw was packed with NPCs to chatter with and learn about the world from, while there's an increased continuity in general - you'll need to buy food to eat in order to restore your stamina after training or fighting, and a wider range of shops will stock lots of items, with prices and inventory differing from store to store.

There's, of course, the part-time activities too - Suzuki talked about things like chopping wood to earn money, or fishing either as a job or as a time-passing hobby. For the fishing mini-game, you can buy new bait and rods and participate in fishing competitions.

As for the rest - it's, so far, so Shenmue. There needs to be an understanding that a crowd-funded sequel without the backing of Sega is never going to be the earth-shattering, cutting edge experience Shenmue and Shenmue II were back in the day - instead, this is something of an old-school revival, layering new systems and ideas onto a game that still very much has that turn-of-the-millennium style.

That style might not be for everybody, especially those without the nostalgia or patience for its specific, plodding pacing, but Shenmue III is honest in its devotion to those now somewhat outdated ideas - and you have to respect it for it. For those that always wondered how Ryo's journey would continue, this very much feels like the sequel we would've gotten in 2003 - just prettier. 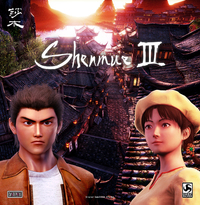