Monster Hunter World: Iceborne doesn't end the moment the credits roll - unlike in the basegame, Capcom have hidden a significant amount of extra content behind the title's postgame, many (if not all of it) centered around the region that you unlock as part of it; The Guiding Lands. Iceborne has a great endgame, but it seems inevitable that people will have some questions about the various systems in play whenever you venture out into The Guiding Lands, so we'll do our best to explain everything as it comes.

The Guiding Lands, and the Expedition Endgame

The Guiding Lands is unique in two senses - the first being that its map is split into 4 sub-regions representing the Ancient Forest, the Wildspire Waste, the Coral Highlands, and the Rotten Vale. Each of these regions has the potential for different monsters to spawn there - and as you continue to hunt monsters in a specific region, that region's level will increase. Different monsters will spawn based off of that level, and there are some monsters that you simply won't find anywhere else (until you unlock an investigation for them, that is). The second "special" thing about The Guiding Lands is that with 1 or 2 exceptions, the only way to visit it is via an Expedition. Thankfully, there is matchmaking, and anyone in the same Online Session as you can join you mid-hunt; but there's no timer. The only time limit for hunts is how long a monster sticks around. 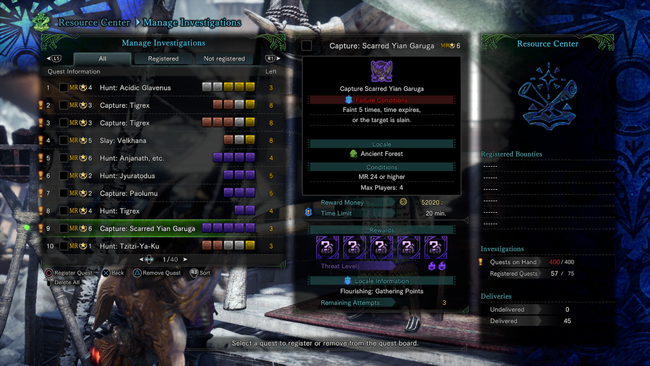 Region Levels and Monsters Exclusive to the Postgame

By my count, there are 7 monsters exclusive to Iceborne's postgame in The Guiding Lands; Zinogre, Yian Garuga, Scarred Yian Garuga, Brute Tigrex, Gold Rathian, Silver Rathalos, and Ruiner Nergigante. Zinogre will be the first monster that you discover in The Guiding Lands, and at least in my case, it was the first Special Track that I uncovered upon landing there. Yian Garuga (and maybe Scarred Yian Garuga?) are the only other monsters that you'll discover right away, as the others will require region level upgrades locked behind Assigned Quests to unlock your MR at MR 69 and MR 99. Here's a list of how you can tackle each of these monsters, and where:

As these monsters all require specific region levels, it's worth noting that to level up a specific region, you'll want to continuously hunt monsters in that region. Keep in mind that as you strengthen one region, all the others will weaken - so make every hunt count! As your region level increases, Tempered Monsters will begin to spawn, as well as Elder Dragons!

Materials, or why you want to grind The Guiding Lands

Different regions will also include special mining points and bone gathering points. The more that you gather from these points, the higher the rarity level of those materials for the region you're gathering in will increase. Thankfully, unlike monsters, gathering in one area won't lower the level of gathering spots in the other regions. Once you max out the level for a gathering spot for a region, a Rare Gathering Point will spawn, which is guaranteed to drop the highest rarity Bone or Ore drop for that region. Afterward, the region's gathering point level will drop, requiring you to level it up again. These highest rarity Bone and Ore drops can be used, along with other materials from those gathering points, to craft Pendants - little visual trinkets for your weapons - among other things. 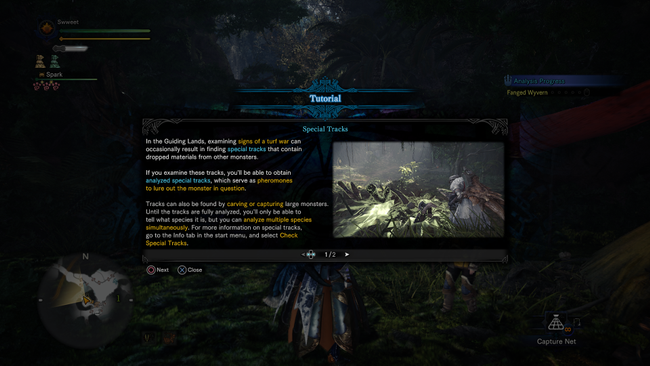 Although the majority of The Guiding Lands is RNG, one thing that Capcom has added to help make it easier to hunt monsters that you want is the addition of the Special Tracks system. As you hunt monsters, and whenever you find Signs of a Turf War when exploring The Guiding Lands, you'll receive a Special Track for a specific class of monster, out of Bird Wyvern, Flying Wyvern, Fanged Wyvern, Brute Wyvern, and Elder Dragon. You won't know which monster the track belongs to at first, so you'll need to analyze it by hunting monsters - hunting monsters of the same class of monster will make analyzing go quicker. Although you won't know which monster you got until the track is fully analyzed, stronger monsters will have tracks with longer progress bars.

Once you've fully analyzed a track, you'll receive a single use Lure that can be used to summon a monster onto the map to hunt, regardless of the region level at the time. Although these lures can only be used once per Special Track, you can store multiple lures for the same monster at a time. That, combined with matchmaking for specific monsters you wish to hunt, means that it's never too difficult to hunt the monster that you want to grind out.

If a region is currently capable of spawning a Tempered Monster version of the Monster you're luring out, then the monster that you spawn will be Tempered. Keep this in mind, as Tempered Monsters will drop different materials! If you're going for non-Tempered monster materials, hunt in some other regions first to bring the level low enough so a Tempered Monster won't spawn. On the flipside, hunting Tempered Monsters is a crazy efficient way to gather tracks. Carving a Tempered Monster will instantly grant a Lure for a monster. Carving tails or scalps will also gift you a Lure, so for something like a Tempered Barroth you're potentially receiving 3 Lures from one monster. As far as I can tell, the lures that you'll receive this way are random, but will only be a monster of the same class as the Tempered Monster hunted. For example - our hypothetical Barroth will probably drop lures for a Glavenus.