Nioh 2 Sudama: how the Purple Kodama work and where to find them, how trading works when asked "it seems as though it wants something"

Anyone familiar with the first Nioh will remember the Kodama, those little green spirits you help along your journey. Nioh 2 has them too, of course, but this time around there’s a new type of kodama. These purple Kodama, called Sudama, are Kodama that have been corrupted by the Dark Realm. However, they can still help you out if you know what to do.

Unlike the Kodama, the Sudama aren’t as key when it comes to having an easy time in Nioh 2 since they don’t offer you passive bonuses. Instead, the Sudama act like a trading system: if you give them an object, they will give you something back. Here we will explain how this system works and where you can find these little helpers. 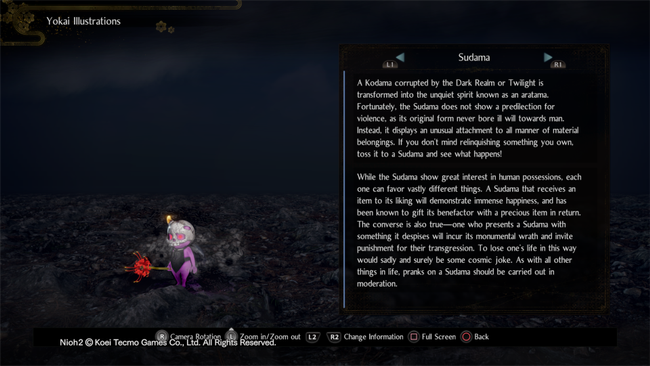 When you find a Sudama, the game will let you greet it by holding down the Circle button. The Sudama will say something to you in yokai language (that the game will sometimes translate) and then a message will pop up letting you know that “it seems as though it wants something”. All you have to do then is open your inventory, find an item you’re fine with giving away and simply drop it. As soon as you close the menu, the Sudama will pick it up, so make sure you’re dropping something you’re ok with losing. Afterwards, the Sudama will give you a couple of items and say goodbye as it disappears.

The first thing to note when trading with a Sudama is that it won’t take more than one item. You can drop multiple things, but once you close your inventory the Sudama will pick the first thing you dropped, ignoring the rest. The Sudama will take pretty much anything you give it, with the only difference being what you get in return.

While the item you receive from the Kodama will be random, there is a logic behind what you can get. Your new item will take into account many aspects, like rarity, type of item and level. Whatever the Sudama gives you will be of the same rarity and level as the item you drop, except for Soul Cores. In terms of level, however, if you give it anything with a +1 next to the level number, you’re not guaranteed to get an item with a +1 back.

As an aside, the Sudama will also drop other items along with the one he trades you, like Spirit Stones (which give you Amrita to level up) or Red Spider Lily, which recover your Anima (the meter you use to perform Yokai Skills). There are some items that Sudama really like and some they hate, but the game is never clear about those and it seems to be random with every Sudama. If it really hates what you give it, it might even attack you and kill you, but as long as you trade equipment, you will be fine.

With all of that in mind, let’s look at one example to make everything clear: you enjoy using Dual Swords but your weapon of the highest level and rarity is a Spear. Next time you find a Sudama, drop it in front of it! Best case scenario, it’ll give you a Dual Sword of that same level and rarity. If it doesn’t, it’ll at least give you another weapon of a different type that you can drop at the next Sudama or dismantle for materials at the Blacksmith. Apply this logic to any item you don’t really like, and the Sudama will become a great ally in your quest for loot. 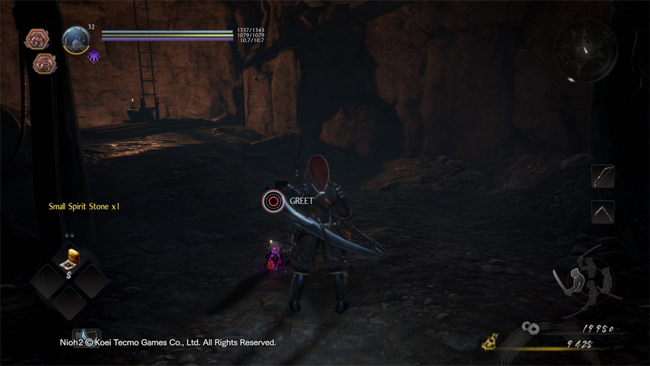 Nioh 2 Sudama Locations: Where to find them

Finding Sudama is slightly different than looking for their Kodama friends. If you’re familiar with the Scampuss, then Sudama follow a similar logic. They don’t give you passive buffs and as such it’s not super important to find them all. Just like the Scampuss, there are a couple of them per level, usually two or three. However, there are some differences between the two when it comes to finding them.

Usually, you will find Sudama out in the open. While most of the other friendly creatures like to hide behind stuff, most of the times Sudama are just strolling around certain areas of a level and it’s very easy to see them. What’s more, their bright purple color contrasts very well with the environment, making it even easier to spot them in your travels since a lot of levels involve rocky ground or green grass.

Still, the same advice and strategy behind finding the Scampuss works with the Sudama: just break everything. When it comes to Sudama it’s more important to explore every corner of a level rather than looking behind every box, but there definitely are some hiding out there in places you might not expect. Again, finding all of them isn’t important but it will really help you get different loot.

Nioh 2 The Search Guide: how to find every Kodama and Sudama

Nioh 2 Scampuss Guide: How to recruit these Cat helpers and where can you find them