Aksys Games is a publisher of various video games but is mostly known for their niche titles and insane bonus items packaged in their initial shipment of video games. I sit down and have a chat with Frank “Bo” deWindt II, the Director of Production at Aksys Games! Bo oversees all production over at Aksys Games such as ensuring the translation and editing of their titles are on schedule, coordinating QA (Quality Assurance), attending voice recording sessions, corresponding with 1st party companies, working with Marketing and Sales, and a slew of other tasks. In short, Bo does a lot for Aksys.

RPG Site: How does localization proceed over at Aksys Games?
Bo: To begin localization we find a title that we would love to tackle as a team. Normally our licensing division will reach out to developers and discover titles we’re interested in. After which, we’ll have an internal evaluation to help us decide if we want to proceed with the title. Assuming everything works out, we get our hands on the text and begin translating. As the script is translated we have our amazing editors begin the editing process. Depending on the project, this entire process can take anywhere from three to nine months, if not more.

Once that’s out of the way, we may have to enter voice recording for the English dub of the game. When all the lines are recorded we dump the text and voice into the game so formal QA can begin. After this step, we’ll submit our master ROM to the corresponding 1st party for testing and once it passes we start manufacturing the game! Of course this all includes the marketing and sales team working in tandem so we have all our bases covered.

This is just a general overview, but hopefully it was somewhat enlightening *laughs*

RPG Site: What is your favorite part of the localization process? Any interesting stories to tell?
Bo: My favorite part would definitely be voice recording. The voice actors we work with are always a joy and a pleasure. It’s very fun and entertaining to hear the game we’ve been working on for so long come to life via their voices. It’s extremely rewarding.

RPG Site: Many gamers have praised Aksys for its high quality scripts. What do you guys do to bring out such witty writing found in games such as Virtue’s Last Reward?
Bo: I’ll go ahead and let one of our editors, Ben, comment on this. He and the rest of the editors’ awesome writing skills bring the witty writing to life.
Ben: I drink a lot of coffee and constantly question my self-worth.

If you’re interested in some sort of philosophy of localization, though, the short version goes something like this: The text in a localized game should be entertaining first, and “accurate” to the source text second. It should be based on the source text, of course, because that’s kind of the whole point, but you don’t win anything for publishing an “accurate” translation that’s awkward, stiff, and boring. At the same time, you don’t want to go too far off track because that’s disrespectful to the creators, a whole lot of work, and an excellent way to discover you’ve written yourself into a corner. It’s all about balance.

The main directive I try and follow in localization is to make things feel, read, and sound natural. If a sentence doesn’t sound like something I can imagine a human being saying, then I don’t write it down (generally—sometimes it’s kind of unavoidable). This is an especially good idea when you’re going to be dubbing stuff: It’s much easier for voice actors to say stuff that reads like something a person would say! The only other trick I feel like I use regularly is: Make everything as short as possible. Often character limits are going to force you to do this, so any practice at it is good, but I routinely find that the less I write, the better my writing is. Twitter, hilariously, is excellent localization practice (you can talk to me @benspants, if you feel like it).

Writing in general is about balance too: You need to have confidence in your ability to do it well, but you also need to actively look for what you do poorly, and learn to accept and learn from criticism. My favorite place to be as a writer is “That was pretty good, but I think I can do a better job next time.”

RPG Site: Aksys pumps out numerous titles year to year and many of them have long scripts. How do you maintain the stamina to localize these titles with such finesse and without being burned out?
Bo: Ha ha, funny you should ask that! We ask ourselves that constantly *laughs* Luckily, we have a very talented team here at Aksys Games so various translator/editor teams are tackling different projects at any given moment. Using this divide-and-conquer approach, we’re able to maintain our workflow without burning ourselves out in the process.

RPG Site: Aksys tends to localize titles that are fairly niche. Will Aksys continue to remain as a publisher of niche titles or are there plans to hopefully expand your scope to include more mainstream titles?
Bo: Our bread and butter is catering to the niche market with titles such as the Zero Escape series, the Hakuouki series, the BlazBlue series, and more. But we aren’t confined to just that area of expertise. We have extended ourselves into more mainstream titles such as the upcoming “Magus” for the PlayStation 3, “Crazy Strike Bowling” on PlayStation Network, the Family series of games on WiiWare, etc.

Since we’re an independent publisher, we value our freedom to dabble in all sides of the gaming spectrum to grow and reach out to our current fans in addition to our future ones. Of course, we’ll always have a soft spot for our hardcore audience, which is very near and dear to our hearts.

RPG Site: Are there any titles you wish you had the opportunity of localizing?
Bo: Personally speaking, and these opinions are not represented by Aksys Games,  I’d love to have us take a stab at more Japanese RPGs and visual novels. Some that come to mind are games like OreShika 2, Time Travelers, Umineko, Super Robot Taisen, etc. There are other titles and series as well but they’re tied to a specific developer or publisher so we can’t touch them! *laughs*

RPG Site: BlazBlue is one of the biggest titles that Aksys has under its belt. Previously, the titles were localized fairly quickly and you achieved nearly simultaneous launches in respect to Japan. The latest title, Chrono Phantasma, didn’t receive that treatment. What happened?
Bo: Ideally we’d love to do simultaneous releases whenever possible. However, when the text is still evolving and being worked on from the Japanese developers it becomes a problem. If the text constantly changes then we’d have to do  a lot of backtracking, re-translating, and re-editing, which is a waste of time and money.

To avoid these situations, it’s always best to begin localizing once the text is finalized. Unfortunately, this creates a time delay between the Japanese and US version. On the plus side, it helps us to ensure the game is released in the utmost quality for our fans to experience and play.

RPG Site: Arc System Works is a prominent 2D fighting game developer and Aksys seems like their go-to publisher for bringing games such as BlazBlue. What is it like working with them?
Bo: Arc System Works has always been a pleasure to work with on all the projects we’ve had with them. One of the best parts is testing the network on the various fighting games we work on together. Trying to battle them online is pretty exciting - especially if we’re able to win! *laughs*

RPG Site: Who is your favorite BlazBlue character and why?
Bo: Hmm... That’s kind of like Sophie’s Choice, because they’re all great for different reasons. The first ones that come to mind are Kokonoe or Hakumen. Kokonoe is great because she’s a scientist and her lineage, but also due to her snark and wit. Hakumen is super cool and powerful. His backstory is interesting and I like how it connects to the other characters.

If you’re talking about gameplay, my mainstays are probably Ragna and Jin because I’m most comfortable playing as them.

RPG Site: Aksys has a ton of goodies and bonus items for gamers who purchases your titles initially. Is it difficult getting together all these bonus items and how do you guys choose them?
Bo: Usually the team for that specific project will get together and brainstorm a variety of items that would be cool to include as a pre-order bonus and/or limited edition component. Normally, we try to include items that are relatable to the game but also have value and a cool factor for the consumer.

RPG Site: Choo choo! The next-gen train is here! Many developers getting ready to board the next-gen era. While Aksys is a publisher and not a developer, what’re your thoughts on how Aksys will transition into the next generation?
Bo: We’re definitely prepped and ready to tackle the next generation head on! While it will be a new experience to deal with, we’re excited to move forward into the great unknown. We hope everyone will look forward to any and all future releases from Aksys Games!

RPG Site: What does the immediate future look like for Aksys and can you share anything special with us?
Bo: We have a lot of future titles in the works and 2014 is shaping up to be one of our best years yet. We’re all pretty excited for all future announcements!

Recently, we announced Hakuouki: Stories of the Shinsengumi on PS3 and PSN so we hope people have the chance to play and enjoy it next year.

There is one title in particular I’m really excited for and it’s [email protected]#@^$^@$^!^#$#$ *There was a break in transmission. Please stand by.*

RPG Site: Thank you very much for your time!
Bo: My pleasure!
Ben: Of course! 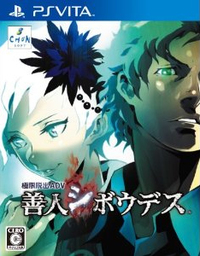