Interview: Yoko Shimomura talks writing some of the genre's most iconic music

At a video game convention, somebody like Yoko Shimomura is a celebrity of the highest order. When I meet her at a major convention, she quietly shuffles through the halls with a few helpers towards the meeting rooms where we’re due to chat. At one point as we wait to go into the room, I spy somebody point at her from a little way away. She was recognized even then – despite her identity being hidden, for the most part, behind the brilliant melodies of her music.

One thing Shimomura seems to have in common with many other visionary Japanese gaming composers is modesty. Like her Final Fantasy-scoring peers Nobuo Uematsu, Hitoshi Sakimoto and Masashi Hamauzu, she seems in awe of her sudden fame and the popularity of her work. 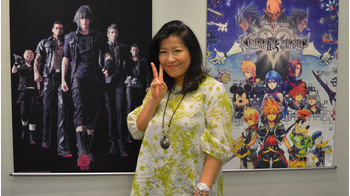 Shimomura, right after this conversation finished up.
“I'm totally delighted about it,” she beams when, as a light icebreaker, I bring up how frequently her work is performed, remixed and re-recorded, from Overclocked Remix to YouTube pianists. “Nobody does that if the music hasn't got popularity... It makes me very happy that people put so much energy into doing such work. It’s very gratifying.”

The circumstances of our little meeting are themselves a great proof of just how popular Shimomura’s work is. While at this show there’s of course promotion for a plethora of major Square Enix titles, she’s not technically attached to any of it – she’s instead out at the show with the Square Enix Merchandise team, out there for the express purpose of promoting the fact that many of the soundtracks and arrangement albums that were previously Japan only are now available on Square Enix’s European and North American stores.

She’s not here to promote a major new upcoming game. She’s here to talk about music and music alone. In that, this becomes a refreshing appointment: entirely focused on not only the thing that made Shimomura into a gold-standard name for many game music fans, but also on an area that she’s evidently hugely passionate about still, after many years in the industry.

“Recently, I've been working on a Legend of Mana arrange album, which is quite different to some of the Kindgom Hearts arrangement work I've been involved with,” she excitedly tells me in response to an enquiry as to if she has any dream projects.

“Some of the tracks from this title have been made available for orchestra through Drammatica, my orchestra arrangement CD, but this one is different – it’s a piano jazz trio!” She laughs as if that idea alone is entirely absurd – and it is, it has to be said, quite an unexpected twist. “That style might be totally unexpected to some - I thought it'd be a good opportunity. Initially I thought it might be a bit of a challenge, but throughout the process I found a lot more confidence with it. I've been thinking of doing more works along those lines.”

“I'm normally not very genre oriented in that way,” she adds when I enquire if she’d like to try more outlandish genres in the future. “Usually the inspiration will come from if I hear something and say, 'Oh! This might be good to use'.”

"For Kingdom Hearts, I've been working on it for quite a while now. Because of that I can make new suggestions myself, I can change the direction and I have ideas about where to take it myself."
Besides her work on new arrangement albums, Shimomura is of course knee-deep in working on Square Enix Japan’s two largest upcoming releases – Kingdom Hearts III and Final Fantasy XV. While she’s had an impressive career spanning everything from her incredible, seminal work on Street Fighter II to Parasite Eve, Terra Battle and the Mario RPG series, these two titles are undoubtedly her biggest undertaking yet – and a slightly daunting one.

Shimomura’s history with Kingdom Hearts is an interesting one. At one point in our meeting, she detours to explain that though she now has the confidence and history with the series to be bolder in pushing it in new musical directions, initially her instructions were quite different to what her gut told her to create.

“In my mind, Kingdom Hearts is very simple - very much Disney, cute and sweet,” she explains. “My original ideas for it were in that area - but on the contrary, I was asked to make very heavy stuff. There was quite the gap between my original idea and what was requested... filling that gap is really the heart of my job! That was what I did with the first Kingdom Hearts.”

One of the greatest challenges that series has provided to Shimomura since becoming a success is balancing the wishes of fans with presenting new musical themes and ideas.

“A lot of game fans feel special feelings towards the original versions of pieces, always,” Shimomura laughs, going on to explain that recreations or evolutions of tracks that fans have already built up a love for are some of the hardest to create. “A lot of the time I consider it brushing up and improving, rather than outright rearranging,” she concludes.

Final Fantasy XV is a different matter, of course, and Shimomura is quite aware she’s inheriting the legacy of three of her most notable peers.

“It’s of course my first attempt with the series – and as a result, the approach is kind of… more tentative,” she admits.

“I'm trying many different methods, and having a lot of discussions with directors in order to share the world view. I also look at images a lot for inspiration, as well as reading and taking in the story to be inspired. It's all that combined which shapes my approach, consolidating all those ideas into one whole.” 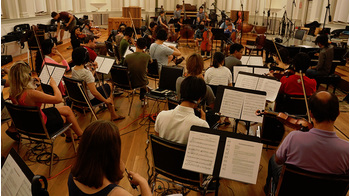 Boston's Video Game Orchestra hard at work on the score for FF15: Episode Duscae last year.
One thing that’s been unique for Final Fantasy XV so far is the use of a North American orchestra, with the Boston-based Video Game Orchestra recording the score for Episode Duscae, something we covered extensively on the site in our interview with Shota Nakama, producer of the orchestra.

“Orchestras around the world have different characters,” Shimomura says when asked about the process of choosing who to record with. “If you're looking for something close to a Hollywood movie, a team in America is of course far more likely to create a more suitable sound.”

“Orchestras in Japan have a more sensitive touch and tend to be a little more detailed. The biggest advantage with Japanese orchestras is that I can be there directly to make a difference to the recordings. In Europe it can be quite different depending on the country, especially Eastern European orchestras; they have quite a dark sound. Japanese people tend to favour that kind of stuff. London, Britain – it is clearer, lighter.”

“Generally speaking, in Japan the climate is so humid that the resonance is maybe more wet, and that lends to a certain kind of sound. That's one thing, but also, on top of that, conductors and concertmasters - depending on who it is - they can be very, very different to what you find in Western countries. I sometimes have ideas based on this - that for certain songs certain orchestras would be more suitable, that sort of thing.”

Writing and arranging for an orchestra is of course far different to how Shimomura started out, with her first works for the simple beeps and boops of the Famicom Disc System, but the storied composer says she honestly doesn’t find the process all that different.

“In terms of composition, for me it's largely the same approach... not much changes within my style if I'm composing for live instruments versus composing for a sound chip. In the era of the Super Famicom and so on, there were a lot of restrictions - so it needed a lot more tweaking to make it express the way you wanted.”

“You can get to the same place,” she concludes, “But it was sometimes harder to do so.”

"Not much changes within my style if I'm composing for live instruments versus composing for a sound chip. In the era of the Super Famicom and so on, there were a lot of restrictions - so it needed a lot more tweaking to make it express the way you wanted."
In spite of that, Shimomura admits that sometimes she misses the old days. “In a way, yes,” she laughs. “Sometimes it could feel like a puzzle. You'd sit there trying to fill gaps, trying to feel exactly where things are - you're solving the problems the restrictions create. It's down-to-earth, basic work - and I've done a lot of those kinds of works. That kind of work gives me a nostalgic feeling.”

Talk of orchestras and sound chips transitions us naturally to a conversation about how increasingly the work of Shimomura and other composers finds its way into concert halls around the world. Shimomura has attended a number of these concerts, and describes seeing her work performed in this way as a great honor, and humbling – though she of course has ideas over what pieces should be performed next.

“Any new tracks I compose are welcome to be performed, I think,” she smiles. “It tends to often be the same tracks that are performed at these events... and while I know that there are still lots of people who want to see the regular stuff, the favorites, it'd be nice to hear more new stuff too. It's looking for that balance...!”

Despite that, and a number of smaller performances with Shimomura taking to the piano, the modest visionary laughs and shakes her head wildly at the suggestion she should one day join a full orchestra on stage.

“I'm not that confident as a performer!” she laughs modestly. “But recently I have started performing small-scale concerts, or smaller events. I don't think I'd join the orchestra on stage just yet, but maybe one day I'd get up there and join them!”

A number of Yoko Shimomura’s works, both original scores and rearrangements and remixes, are available now through Square Enix Europe and Square Enix North America’s online stores. Thanks to Square Enix Merch EMEA for setting up this interview. Oh, and the Legend of Mana arrangement album she talked about is 1) really fantastic and 2) available now.

Final Fantasy XV Music Guide: Where to find all the classic FF music for your car