Square keeps bringing us the love on a seemingly weekly basis. Vagrant Story, Xenogears, Parasite Eve, and now, Legend of Mana finally has a good conscious to come out of hiding and grace us with its presence.

Coming to North America's PSN tomorrow, Legend of Mana takes place in the colorful and wildly-designed world of Fa'Diel. Shortly after the Mana Tree was burned down, the world has become shapeless and distorted. The hero (whom you can choose between a male or female) has been tasked to complete various tasks in order to obtain Artifacts that can be dropped on the map to reform the lands once lost, with over sixty Artifacts and quests to obtain. In the meantime, players can also craft weapons and armor, trade cards, grow fruit, and raise their very own beasts that can help you on the field of battle, all of which allows for dozens of hours of additional content with huge replay value.

I am very, very fond of this game, almost as much as I enjoy Secret of Mana, so I highly recommend picking this title up tomorrow. Hell, play it with a friend! You can still enjoy the wonders of two-player coop in this game as well. You can even load a Legend of Mana main character from a different save on your memory card - though there isn't any confirmation on whether this feature will also be included in the PS3 version. 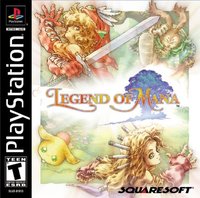