NieR Replicant's Remaster has been rated in Taiwan

NieR Replicant ver.1.22474487139... has recieved an age rating in Taiwan - bringing us one step closer to the highly anticipated HD Remaster of the cult Xbox 360 and PlayStation 3 hit.

In real terms, this release is a HD Remaster of the classic game, but the unique name was picked by Yoko Taro to indicate that this is what he describes as a 'version upgrade'. It was announced back in March of this year. An English release was confirmed at the same time.

The NieR Replicant remaster age ratings appeared on the website of the official Taiwanese game ratings board, with separate ratings appearing for the PS4, Xbox One and PC versions of the remaster.

Back on Xbox 360 and PS3, Nier came in two forms - Gestalt on Xbox 360 and Replicant on PS3. The two were essentially the same game, but each version had a different protagonist and slight story differences. The remaster follows the PS3 version of the game - which up until now has been Japan-exclusive.

With any luck we'll get more information on the timing of NieR Replicant's release soon - Tokyo Game Show is just around the corner, though the remaster is not presently listed on Square Enix's TGS lineup. 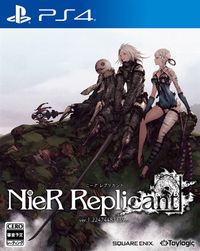