Atomic Wolf has revealed 4 Minutes to the Apocalypse, a first-person action-adventure RPG that takes place on board a submarine during a nuclear war. The game is expected to launch in 2021 for PlayStation 4, Xbox One, and PC.

In 4 Minutes to the Apocalypse, it looks like the world has largely destroyed itself with nuclear missile attacks and subsequent retaliation. You are on board a secret submarine known as the Arizona 12 that houses nuclear armaments, and what happens with those armaments is up to you.

A reveal teaser, description, and screenshot set can be found below via Atomic Wolf.

HOW HARD IS IT TO PRESS THE BUTTON THAT ACTIVATES WEAPON CAPABLE OF ENDING OUR ENTIRE CIVILIZATION?

It was a short nuclear war of just a few hours. It is not known who started it and why. Probably it was decided randomly. Perhaps it was a human or computer error. All those who would know are dead.

After the first rocket attack, everything happened so fast. Retaliatory strikes were launched one after the other with only a few minutes intervals. On that day, millions of people died and the largest cities were razed to the ground. Those who survived had to face the world, which with each passing hour and day plunged into increasing chaos ...

However, This Was Just the Beginning

The vast majority of weapons that belong to the arsenal of "The Last Day Weapons" were not used for some unknown reason. Created to deter and not to be used, powerful enough to end life on our planet.

After the war, which caused command centers to be destroyed and governments to cease to exist, this weapon remained without any control. One of the most dangerous units of this arsenal is the Arizona-12 secret submarine.

Who will take control over it and what will it be used for?

4 Minutes to the Apocalypse Screenshots and Key Art

The first Utawarerumono is getting a remake for PS4 and Vita

Swery is working on a new RPG called The Good Life

4 Minutes to the Apocalypse 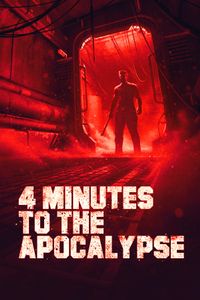