Gust has published the official promotional trailer for Surge Concerto DX in Japan. This title is a set of remasters for the adventure game Ciel nosurge and the RPG Ar nosurge.

In the Gust Autumn Special Livestream, the Koei Tecmo brand studio confirmed that these remasters are based on the 2014 PlayStation Vita releases of Ciel nosurge Offline and Ar nosurge Plus. While showing in-game footages of the remasters, Gust also noted that while the original Ciel nosurge on the Vita allowed players to literally touch the heroine Ion by using the touchscreen, such controls will be changed to controller-based in the remaster.

The Japanese release of Surge Concerto DX will have three tiers of limited editions. The most expensive one—Agent Pack Code:Gold/. with 7DGate Connection Bundle—includes a set of 5 chibi figures, an acrylic diorama background, a dakimakura cover, and a hand-operated orgel box. It is priced at a whopping 108,790 yen (approximately US$1,038).

Surge Concerto DX—containing Ciel nosurge DX and Ar nosurge DX—will be released for PlayStation 4, Nintendo Switch, and PC via Steam in Japan on January 28, 2021. An English localization of these remasters has still yet to be confirmed.

Ar nosurge Plus: Ode to an Unborn Star 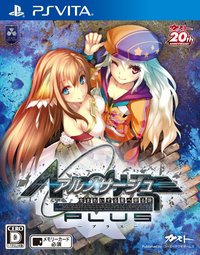