Action Adventure RPG We are Legion: Rome announced for PlayStation, Xbox, and PC

Publisher Gaming Factory and developer Titanite Games have announced We are Legion: Rome, an action-adventure RPG set to release for PC (Steam) as well as PlayStation and Xbox consoles. No release window has been announced.

An announcement teaser trailer, fact sheet, and screenshot set can be found below via Gaming Factory. The official website is here.

The Roman empire would not have become the global power of its time were it not for its extremely well-trained, loyal, brutal, combat-experienced, goal-oriented, and ruthless soldiers. Formed in armored legions and armed with swords and shields, they moved forward as unstoppable waves, leaving behind only burned ground.

You are one of these legionaries and think highly of yourself. You despise those you consider barbarians and blindly believe that Caesar’s way is the only way. You are driven by only one desire – to become the commander of a Roman legion.

We are Legion: Rome is an action-adventure RPG set during antiquity, heavily focused on varied directional attack-based combat. The game will give you the chance to face dozens of demanding opponents on many battlefields. Each opponent will require a different strategy to achieve the goals the Roman empire sets for its legions: from surrounding the enemy and setting fires, through operating siege machines to holding position after securing a victory. As a Roman legionary, you’ll be able to join cohorts of different specializations. The defensive cohort will require the use of a shield, a short sword, and a particular skillset, while the offensive one will give you a good idea of combat during antiquity while testing your ability to counter and fake stabs. After a battle, you’ll be able to relax at your camp while customizing your character, learning his story, and the game’s fictional background.

We are Legion: Rome

We are Legion: Rome 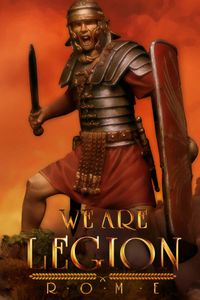