Publisher Assemble Entertainment and developer Solar Powered Games have announced that pixel-art urban survival RPG Highrisers will launch for PC (Steam) on May 6.

Highrisers began life as a Kickstarter campaign in 2016, raising more than €51,867 for the project.

A gameplay trailer, description, and screenshot set can be found below via Assemble Entertainment. The official website is here.

Humanity has been struck by a mysterious prion disease, which left those infected trapped in an eternal dream. Unable to wake up, they transformed and changed into the mysterious dreamers: sleepwalking, zombielike creatures that shun the light.

They now dwell in the dimly lit urban canyons of the cities and the lower levels of highrise buildings, hiding away from the sun; only to come out at night, trying to get those who still resist.

Four survivors are stuck on a skyscraper in a desolated metropolis, and only through tenaciousness, tinkering and teamwork will they prevail.

Without the comfort of a functioning society, cities start becoming a harsh and hostile environment very quickly. In order to survive and find a way out, the team must search every nook and cranny of the building, and scavenge everything they can get their hands on. They have to explore the buildings, scavenge for spare parts, tools and food; and prepare for the nightly onslaught of the dreamers.

From simple clubs over crossbows to improvised firearms and explosives: with the right materials, tools and a good amount of ingeniousness, the survivors can craft an arsenal to be reckoned with. And it's not just weapons: barricades, workbenches, tools, machinery, medicine, food and much more is available.

Before crafting comes research. Many of the more advanced inventions require certain skills. And while there is quite a lot of useful knowledge to acquire, the survivors don't have the time to learn everything. With the right combination, they might make it through another night.

Luckily, the survivors can pool their resources, their skills and their knowledge. If they work together and combine their abilities, they increase their chances of survival tremendously. An old, crashed helicopter on the rooftop is their only chance. Although it will never reach full flight capabilities again, they can use it to jump from rooftop to rooftop, thus slowly making their way out of the city. 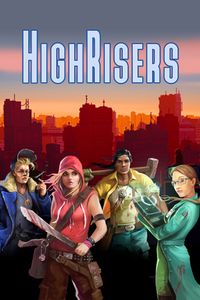