Square-Enix has finally released the first full trailer for their upcoming 3DS title, Heroes of Ruin.

Developed by n-space and Square-Enix London, this action RPG features up to 4 player co-op, both on and off-line.

Heroes of Ruin will be available for the Nintendo 3DS sometime in 2012. 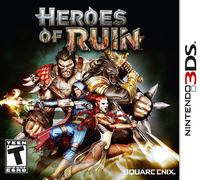