You may have not heard of Square-Enix's Lord of Arcana, a PSP title that released to little fanfare earlier this year. Apparently, however, it did well enough to spawn a sequel, and so we have Lord of Apocalypse.

While the previous game was on Sony's PSP, LoA will be also be releasing on PlayStation Vita. This marks the first time Square-Enix has really commited to a launch title for a new system.

Not much else is known about this action RPG, other than that it is set in the world of Lord of Vermillion, and features elements such as character customization. 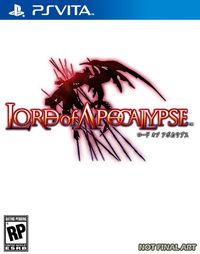 Secret of Mana
Adventures of Mana
Lufia: Curse of the Sinistrals
Rise of Mana
Dragon Quest X: Rise of the Five Tribes Online