Jump Festa has kicked off in Japan, and one of the biggest games at the show this year is Kingdom Hearts 3D for the Nintendo 3DS, set to release in Japan in March 2012.

Those who sample the public demo are being treated to an 8 minute long PV. The video itself is quite packed with new reveals, and news has slowly been leaking out onto the net.

Character reveals include Terranot, Vanitas, Xion, Roxas and Axel from the KH universe. The World Ends With You is playing a big role in the game as it adds both Joshua, Rhyme and Shiki, in addition to Neku.

As for the PV itself, it should be released online in due time, if past (recent) Square Enix trailers are any indication. 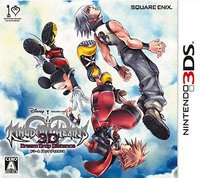