Tecmo Koei and Nintendo have released a small new batch of assets for their upcoming DS cross-over game Pokemon + Nobunaga's Ambition, showing off how some of the gameplay in the Strategy RPG looks in action.

Tecmo Koei has traded off Japanese adoration of the Sengoku period of Japanese history with their Samurai Warriors, Romance of the Three Kingdoms and Nobunaga's Ambition games for some time - and now they're partnering with Nintendo to merge that with another hugely popular Japanese gaming icon - Pokemon.

The new game features famous faces from the Sengoku period battling it out, but instead of massive armies they settle their issues with Pokemon battles. Check out the screens below, and remember you can also find artwork from the game in the Media Vault. 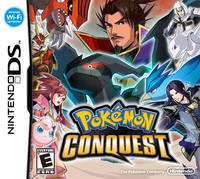