Eisuke Yokoyama, the co-producer of Final Fantasy XII: Revenant Wings and Motomu Toriyama, the scenario writer/director were reccently interview and asked a number of probing questions about the upcoming DS title.

* When asked if the game would use FFXII's ADB system, Yokoyama said that the battle system is mostly new. However, in order to keep FFXII players from getting confused, there will be a number of shared elements. The Gambit system will be a part of this title, although it will be simplified in order to accommodate beginner players. Also, the battle system will be fully playable with the stylus.

* Dengeki asked a question about the number of party members capable of joining your group. To this, Yokoyama responded that Fran and Balthier will definitely join in as party members (they were shown in the Tokyo Game Show trailer, after all). Due to the new game systems, Yokoyama expects there to be more party members than in FFXII.

* Summon beasts will apparently play a big role in the game. Toriyama expects Revenant Wings to have the most summon beasts of any Final Fantasy game ever. The summon beasts will be the key to battles, said Toriyama, and their use will be different from that of previous titles.

Nothing has been confirmed on the Wi-fi side of things, but the game has no release date as of yet, so multiplayer may well be added before the game is released. 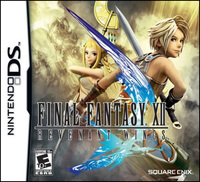