Another trailer for the latest entry in the handheld spinoff series of the iconic Shin Megami Tensei franchise has just been released.  With the game launching later this month, this is all but guaranteed to be the final one.

In addition to the trailer, Atlus has just launched a new site with some helpful information.

With the DS at the end of its rather fruitful life, this should be a relatively notable swan song before all prominent development shifts to the 3DS. 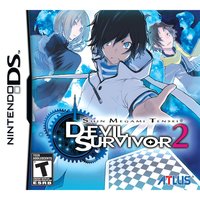