It looks like the expansion pack rumored only the other day appears to be in fact a reality. During yesterday's annual VanaFest, a two-day special event celebrating everything Final Fantasy XI, Seekers of Adoulin was officially revealed, which will be allowing players to explore the far western land of Ubuka and its capital, Adoulin. After waiting for more than four years, it looks like this will be a pretty big update that promises a lot for fans to get excited over. 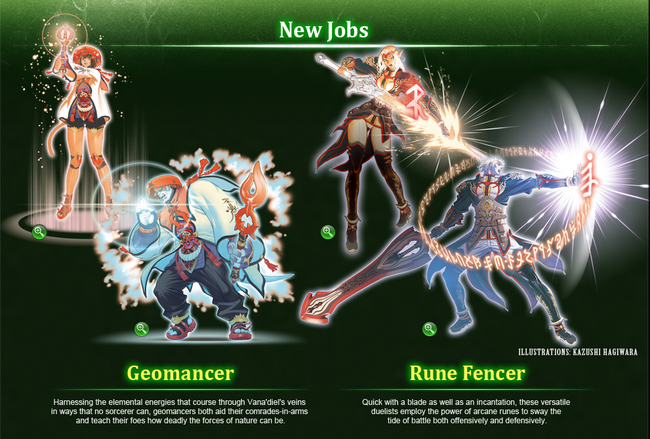 Perhaps the biggest news is the announcement of two new jobs for players to unlock in the game. The first is the Geomancer, which uses the power of the different elements at their disposal, as well as a focus on enfeebling and buffing. As in previous Final Fantasy games, the natural environment will also play an important part, and where the Geomancer stands in relation to the enemy will have different effects. The second is the Rune Fencer, whom uses the strength of arcane runes in order to add elemental damage to their attacks and increase resistance to certain elements. They will possess versatile abilities that will be able to amplify their enhancing magic and the ability to cast a magical barrier. Wait, shouldn't it be called Lune Fencer?

Along with the new jobs, there is also an entirely new game system called Reclaim the Land, that includes two functions: "Pioneering" and "Exploration". With "Pioneering", player will be able to claim their own piece of land, and will be able to fish, grow crops, mine for minerals, raise and shear sheep, and more on the new continent. There will also be supposed dangers to overcome and being tasked to destroy rocks and trees in the environment to clear the area of hazards. Players can even build their own outpost that will allow you to garner quests, purchase items, and use it as a Home Point and have the ability to influence the area with its establishment. "Exploration" will task players with collected assorted fragments scattered throughout the wild land of Ubuka in order to reconstruct statues may just find that they affect the fearsomeness of their foes, the size of the environments, the amount of reapable rewards and other aspects of these perilous dungeons. The development team also teased new guilds that players can join in Adoulin, including the Information Guild, the Security Guild (being a bodyguard sounds awesome), the Transportation Guild (being an escort doesn't), and the Workshop Guild.

To mark the announcement, a trailer has also been released which I have posted below. The unfortunate bit of news is that it appears the PS2 version may be exclusive to Japan, as the only platforms announced for the new expansion pack for North America and Europe are PC and Xbox 360. Final Fantasy XI: Seekers of Adoulin will be released in 2013.