The Transformation of Ludger in Tales of Xillia 2 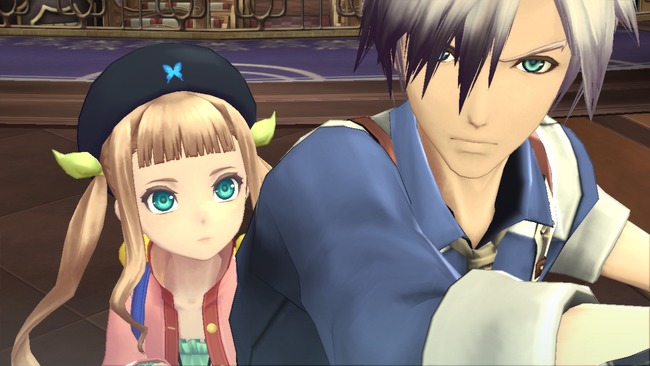 In the latest issue of Famitsu magazine, more details have been shed about Tales of Xillia 2's main character, Ludger Kresnik. It turns out that at a certain point in the story, he obtains an ability that allows him to transform and travel into another dimension of the world that even holds an alternate history from the real world.

After discovering his ability, the president of the highly-influential Clanspia Company who watches over this other world, Bizlee, wants Ludger to eradicate this other world by destroying time factors, or core shard, in each area. He must do this task before he is allowed to leave.

This transformation gives him a special form that can even be used in combat. WHen a gauge on screen fills up, players will need to hit L3 and R3 to activate it, bringing both him (and only him as far as we can tell) and the monsters on the field into the other dimension where concepts such as HP, TP, and AC don't exist, and he has a large advantage over his foes.

Also noted in the article is the return of Elise from the original Tales of Xillia with her doll-looking creature Tippo. Rowen will also show up, who now serves as a prime minister and servant for the King of Gaeaalong with a new character named Vell who works as the secretary for Bizlee. Vell was reveiled to be Ludger's childhood friend and older sister of Nova. All three will be playable characters in your party.

Tales of Xillia 2 is set to release in Japan on November 1st. There is no news on a Western release, though we certainly know the original will be arriving here sometime next year.

Milla returns in Tales of Xillia 2