Square Enix has released their first batch of screens for the upcoming 3DS remake of Dragon Quest VII: Warriors of Eden.

These shots display the full 3D makeover the game has received, as well as some changes like the removal of random encounters, Streetpass features, jobs, characters, along with a few interesting implications like a third person camera at one point in battle.

The game is set to launch in Japan early next year on February 7th.  Still no word on a western release, but it should be likely.
Advertisement. Keep scrolling for more
Post to TwitterPost to FacebookPost to RedditPost to Tumblr
Enjoyed this article? Share it! 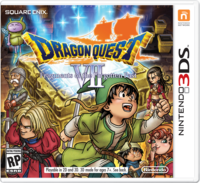