Denpa Men 2: Beyond the Waves coming to North America and Europe this month

Nintendo has announced they will release the sequel to last year's 3DS eShop RPG, Denpa Men: They Came by Wave, on May 30 in both North America and Europe.

Like its predecessor, the quirky RPG will make use of the AR function, allowing the player to "capture" the invisible Denpa Men that reside all around them.  Each one is unique, and will have different abilities in battle.

Check out the trailer and some screenshots below.

The Denpa Men 3 is coming to the West

The Denpa Men 2: Beyond the Waves 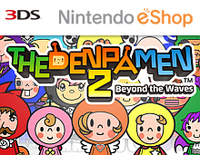 The Denpa Men 3: The Rise of Digitoll
Pokemon Battle Revolution
Dragon Quest Swords: The Masked Queen and the Tower of Mirrors
Beyond Good and Evil 2
Pokemon Black and White 2