It's a real good day to be a dungeon crawler fan. During their panel at this year's Anime Expo in Los Angeles today, Aksys Games have announced that they have licensed Compile Heart's quirky Roguelike Sei Madou Monogatari, or Sorcery Saga: Curse of the Great Curry God as it will be known here in the West. Based off of the long-running Madou Monogatari series that was released in 1989, this will mark the first time it has ever seen a release on this side of the ocean.

Purupuru wants to create the ultimate curry to save a local restaurant that is facing a crisis. To do so, she strikes out on an adventure to hunt for the best ingredients she can find. It bears a striking resemblance to Shiren where in if you die, you lose everything on your person, and if you leave the dungeon, you return to Level 1, so the focus is on items and equipment you find. Players will also be able to use the ingredients with recipes they find to create curry that will provide different effects.

The game is set to be released for the Playstation Vita in North America sometime by the end of the year. There was no word about a European release. A trailer for the Japanese version of the game featuring gameplay footage can be found below. 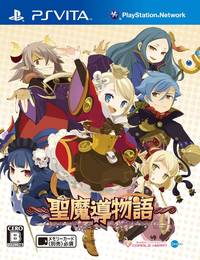