Ever since evidence leaked of a cancelled Western-developed Final Fantasy XII spin-off, online conversation about a potential Western take on the series has been intense. The talk is even referenced in recent Square Enix release Deus Ex: The Fall, where an optional email viewable on a computer declares the latest FF deserves to be Game of the Year 2027 - "Giving it back to a Japanese developer was the right move," the email winks.

When RPG Site got a chance to interview Final Fantasy Brand Director & Producer Shinji Hashimoto earlier this month we asked him his opinion on a potential East-meets-West development - and he's still clear that he - and the company - haven't ruled it out entirely.

"I wouldn't say no straight away!" he told us with a chuckle.

"It depends on the proposal and everything, though, of course," he elaborated. "Obviously Final Fantasy is traditionally a Japanese game, so it would really just depend on how discussion goes. But, yes - if any Western studio actually approached us, we'd of course think about it."

While Hashimoto wouldn't talk about the Final Fantasy XII project, codenamed Fortress, it is clear that Square Enix hasn't been entirely turned off the idea of a Western-made Final Fantasy by their experiences with that ill-fated title. 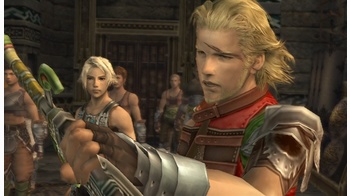 We almost revisited Ivalice again - but with a Western twist.
'Fortress' was in development in 2008 at now-defunct Swedish studio GRIN and was envisioned as a PS3, PC and Xbox 360-based sequel to FF12 featuring a Queen Ashe and an ever-expanding Fortress to battle through. It was Final Fantasy but with a Nordic, Elder Scrolls-like flavour.

At some point Square Enix lost confidence in the project and pulled it from GRIN, who were on the verge of bankruptcy after several flops.

The project was then allegedly shopped to other studios before being cancelled entirely. In 2011 Final Fantasy XIII series director Motomu Toriyama told Videogamer.com that the title was "Suspended," and "won't be released."

"We can't really see it happening," Yoshinori Kitase told the site about a Western-developed FF at the time.

Series Brand Director and Producer Hashimoto is evidently more optimistic and perhaps more open-minded about the possibility, even after the failure of Fortress. He's also been involved with East-West collaborations before with the largely unsuccessful Front Mission Evolved.

"I don't know why, but one of the things about Final Fantasy and Kingdom Hearts is that they're very unique - it's a very unique proposition that we have," Hashimoto told us, reasoning why such a spin-off would be difficult to get right.

"I think that's why it's quite difficult for people to approach us with such ideas."

Square Enix will host a press conference during E3 2018