The game was announced today as Sony Computer Entertainment Japan Asia's press conference, where Comcept's Keiji Inafune made an appearance to announce and detail the game, insisting it was a brand new addition to the series and not just an update.

Delta will include new elements as well as what Inafune described as a "neutral force" for the game. More details will arrive next week at Tokyo Game Show.

Soul Sacrifice Delta will release in Japan for PlayStation Vita next March. No western details were confirmed, but the first game appeared in the US and Europe this past year so it's likely Delta will also be coming over too.
Advertisement. Keep scrolling for more
Post to TwitterPost to FacebookPost to RedditPost to Tumblr
Enjoyed this article? Share it! 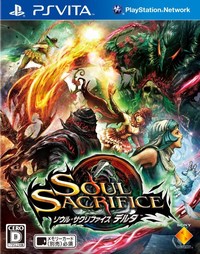