The now-traditional third game of any generation of Pokemon has landed in Japan, and boy has it caused waves on the charts there.

Pokemon Platinum, set in the same universe and with the same plot as Diamond and Pearl adds several new scenarios and even a few new Pokemon to the already near-perfect evolution of the Pokemon formula from Diamond and Pearl.

It seems we weren't the only ones who liked Diamond & Pearl - fans were left itching for more - and in it's first two days on the market, Pokemon Platinum sold a whopping 967,675 copies.

Pokemon Platinum is almost certain to see a western release, especially after sales like this.

It's been a strange week on the Japanese charts, for sure - this comes the same week that Infinite Undiscovery boosted the Xbox 360 hardware sales above both PS3 and Wii for the first time in Japan. 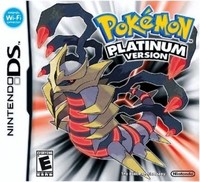