Altus released two new videos on their dungeon crawler spin-off Persona Q, one focusing on the protagonist of Persona 3, the other on the protagonist of Persona 4.  These trailers are in Japanese, so those without knowledge of the language won't be able to understand what the characters are saying, but the videos also show off various bits of the battle system, including the addition of main line Persona mechanics such as All-Out Attacks.

Persona Q: Shadow of the Labyrinth currently has a June 2014 release date in Japan.

Persona Q: Shadow of the Labyrinth 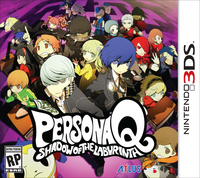