Nintendo keeps on dropping the big news at their press conference in Japan.

The latest? Final Fantasy: Crystal Chronicles has yet another iteration in the works, this time for both the Nintendo DS and the Nintendo Wii. Seperate from Ring of Fates, the game will make heavy use of the DS and Wii connectivity in-game.

Nintendo has announced that the game will be avaliable simultaneously on both DS and Wii in Japan on January 29th 2009. Dragon Quest IX will follow shortly after in March. 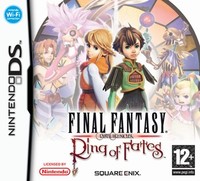