Square Enix have now opened up an official website for Final Fantasy Crystal Chronicles: Echoes of Time, the cross-platform DS and Wii title announced at Nintendo's press conference this morning.

The website reveals that the title will be made avaliable on both the DS and the Wii simultaneously, and will be an action RPG supporting up to four players. Four people will be able to group together online or offline, with cross-platform play a possibility - two DS and two Wii gamers could adventure together.

The Wii and DS versions are identical - the extra screen space on the TV is used to accomodate both the DS screens. Touch screen functions are completed with the Wii Remote pointer.

The game is set to launch in Japan in January 2009. We'll bring more on this new title as we get it. 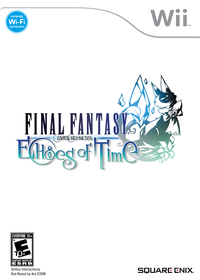