Fire Emblem: Shadow Dragon for Europe in December, US 2009

Nintendo has announced that Fire Emblem: Shadow Dragon will be released in Europe before the end of the year, arriving alongside Animal Crossing Wii and WiiSpeak on December 5th.

The DS RPG is a further continuation of the Fire Emblem series, and is already released in Japan. US gamers will have to wait until 2009 to get their hands on this one, though. 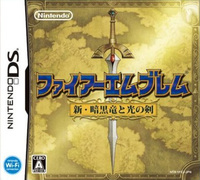