With Tales of Zestiria formally announced for the West and the East, a whole pile of information is bound to trickle out over the next few months. To kick things off the official Tales of Zestiria website was released along with some information that has been made public through magazines such as Famitsu. Below you'll find information about the world of Tales of Zestiria, trinkets of plot, and the two main protagonists in the game. Enjoy and be sure to stay tune for more Tales information in the future.

Tales of Zestiria is set on the continent of Greenwood. The abundance of lush green and colorful worlds are immediately evident when traveling across it. This attunement to nature and the people's ties with religion are a focus of the game. It is said that people of Greenwood take pride in their religions and while there are many they all have certain details that are common amongst them all. One particular point is the beings called the Divine People. They are the deities that control the world and many idolize them in some way, shape, or form.

While normal people cannot communicate with the Divine there are those who cann. In order to communicate with them a person must form a contract and control a special power. The contract entails that a person be pure of mind and in body and the Divine force will fill them up. These special persons, eventually came to be known as Sages, are revered by many but they are equally feared by others. Legends say that they are saviors granted with god's powers.

The continent is vast and within it are two ruling societies vy for power. They are: the Kingdom of Highland and the Empire of Lowlance. Highland and Lowlance have been at war for many years but even so life in Greenwood goes on.

Highland is set upon the higher elevated lands of Greenwoods, as the name implies, and is filled with green and lively nature. While the roots are based in tradition and old-fashion thinking, the newer generation have created an impact on Highland to faze out the older ways. Their political structure is a perfect example of this as the there are no nobles or higher class with political power but a bureacracy of sorts ruled by a King.

Lowlance on the other hand is located in the lower plains of Greenwood. While there is an abundance of greenery, the fertile lands is what gives the nation its strength. In combination with its strong military power the nation has experienced a technological upheavel. Even so, while its capitals are benefiting from the advances the towns elsewhere have yet to experience the same surge. Additionally, unlike Highland, the political power belongs to a religious group known as the Lowlance Church making it similar to a theocratic structure.

Threi is a teenage boy with a high level of optimism that rivals his enthusiasm. An explorer at heart, Threi wants to travel all over Greenwood exploring its vast lands and the mysterious ruins scattered throughout in order to understand and know how people can live with the Divine people. His fascination in ancient ruins and in the divine people is rooted in the discovery of The Divine Records he happened upon as a child. The combination of his attitude and his zeal for discovery naturally draws people to him.While Threi goes on a journey to research history, Alicia's past is filled with history. She is a princess from the Highland Kingdom but is the farthest from inheriting the throne due to her being one of the last children born in the royal lineage. Additionally, her mother was of low social status and as a result she is frowned upon and mistreated by the Highland roylaty and its political figures. Despite her heritage and troubled past, Alicia chooses to serve her country not through politics but through her spear. Alicia is enlisted as a knight with a strong and stalwart personality.

Threi is born isolated from the outside world and as a result is pure of heart. He lives in the Forest of the Divine and is forbidden from leaving it as the villagers are afraid that monsters will attack him due to his naturally strong spiritual powers. However, despite being kept in the forest Threi enthusiastically reads his Divine Records and researches the ancient ruins near his village. His research eventually lead to the conclusion that the Divine and humans could communicate and coexist and as a result continues to vehemently research to find how.

One day while researching, the ruins begins to fall apart and Threi falls to the lower parts. While attempting to escape he finds an unconscious girl, Alicia, and comes to her aid right away. The girl regains consciousness and the two protagonists make their way out of the ruins. At first Alicia had her qualms and doubts about Threi but over time she gradually became trusting of him. She explains that various disasters are occuring throughout the world and people do not understand why. To discover why Alicia journeyed to the ruins in the Forest of the Divine... 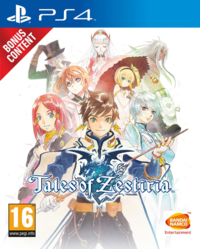