The Denpa Men 3 is coming to the West

The Denpa Men series, a very odd series of 3DS downloadable eShop RPGs, are very Dragon Quest-like dungeon crawlers with the unique aspect of being able to collect new Denpa Men via 'radio waves' (or rather, wi-fi signals) with different stats and powers depending on the signals said waves give off.  The third game of the series released in Japan in August of last year, and little has been said about the title making the trip Westward.  Thankfully, it seems like the game will indeed be localized, as it was recently rated by the Australian Classification Board.

If you're interested in The Denpa Men 3, here's the Japanese trailer to get you better aquianted with the title:

Since this isn't an official announcement by Genius Sonority themselves, there's currently no release date set for The Denpa Men 3.

The Denpa Men 3: The Rise of Digitoll 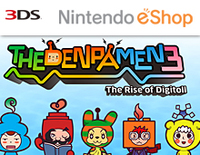