Well, after 15 years of development, this is it. Turbine has announced that they will be ceasing major development on Asheron's Call, arguably one of the best MMORPGs to ever be released.

They have announced that the latest update in the storied title will be its final one. Don't expect some simple balancing, however: the team have added features such as a PVP Coliseum; an Enlightenment system where players who have reached the pinnacle of their class can start all the way over at square one; and much more. They will still be putting out small updates to keep the core of the game functional with maintenance patches here and there, but this will be it for the big releases.

Fret not, howver! They have also announced that in the near future, they will be releasing both Asheron's Call and Asheron's Call 2 free for all players, converting accounts into this new model for all to enjoy, as well as releasing the server and client software to allow players to run their own private servers for other people to hop on and play. They also intend to work with the community to help them create their own content to help build and customize their own worlds inside of the game.

I will forever remember Asheron's Call as one of the first experiences I had with the genre, joining with a group of friends in our orange robes and torches as we ran around to different towns in our makeshift guild. Then they had to go and blow up Arwic and left a giant crater where it once was. Boo. 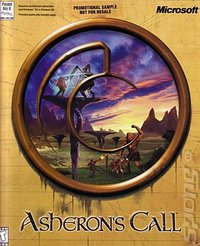