Theatrhythm Dragon Quest was announced earlier this month, and already the media is coming in hard and heavy. Following the new Jump Festa debut trailer for the upcoming music rhythm RPG, we now have a batch of screenshots to add to the gallery showcasing what entries into the series that the game will represent which obviously includes every game in the main series.

Time will tell whether the developers will lean that much into the many spin-offs that the series has had, but for now I'm just happy to see that the gameplay will be more focused on the interesting first-person combat.

Theatrhythm Dragon Quest will be released on March 26th, 2015 with no word on a localization. 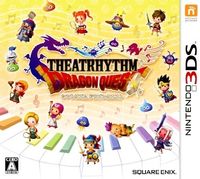