Atlus USA has announced that they will be bringing Etrian Odyssey 2 Untold: The Fafnir Knight to North America this Summer for Nintendo 3DS. It will be available at retail and on the eShop for $49.99.

Much like the first  Etrian Odyssey Untold, the game includes voice acting and animated cutscenes alongside a new story mode, where a group of five uncover the secrets of the Fafnir Knight. Etrian Odyssey Untold 2 also brings in new dungeon layouts, new graphics, and system improvements from its predecessor. You can find the press release and announcement media below. Visit the official website here.

Untold Classics: Etrian Odyssey 2 Untold has two ways to play the game, continuing the tradition of the Untold franchise. Classic mode revisits the original Etrian Odyssey 2 with updated graphics, player conveniences, and a full roster of classes. Story mode features a fixed party, but includes voiced dialogue, animated cutscenes and a bittersweet arc that explores the relationship between Arianna and the Fafnir Knight.

What the Fafnir? The titular knight is the Fafnir class and is a never-before-seen addition to the Etrian franchise. He has the ability to transform into a beastly demonic form, which enhances his attributes and abilities, and is only available in the Story mode.

Bring a Blanket: Just as in Etrian Odyssey Untold: The Millennium Girl and Persona Q, in addition to normal difficulty, players can choose Picnic mode for a low-difficulty experience or the masochi... er, veterans amongst them can choose Expert mode for a punishing play-through. 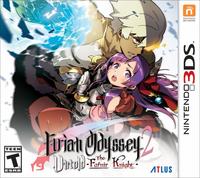