Lost Dimension releases in North America and Europe this Summer

After a little bit of teasing last week, Atlus and Sony Computer Entertainment have announced that Lost Dimension will be headed westward this Summer. Atlus is handling publishing duties in North America while NIS America is taking care of Europe. The NA price point is said to be $39.99, and according to Atlus the game language will be English.

Check out the opening trailer and screenshots below, as well as a description of the game from Atlus.

Well, let me paint a nightmare scenario for you: your pool of warriors that are leveling up and gaining experience have a few traitors in their midst. And as you inch closer and closer towards the final boss, you’re forced to kill one of your teammates — hoping against all hope that you figured out enough clues along the way to be able to correctly identify which one of them is actually a traitor. And after you repeatedly undergo this pattern of trial of accusations and executions (bear in mind this is on top of a full day of combat) you’re squaring off against the final boss, only to have several party members turn on you because SURPRISE, you picked the wrong traitor. The End.

KEY FEATURES:
A Cataclysmic Whodunnit! - Not only will players have to keep their eyes focused on strategically defeating the enemies laying in wait on the field of combat, but they need to carefully watch party members' tendencies in order to expose the traitor. At the end of every floor, players will be forced to vote and eliminate one of their trusted allies, and the consequences for choosing incorrectly could be dire...

Spoiler-Free Zone - In addition to a variety of game mechanics to help assess teammate loyalty, Lost Dimension's traitor system is randomly determined, assuring that no two players will be faced with the same playthrough. Sorry, kiddies, but it's impossible to look up the answers this time around.

Psychic Warlords - Each character in the party is a master of a different sphere of powers. There's the girl who controls molecular behavior to burn or freeze anything/anyone in her path. There's the guy who can teleport all around (also with the bonus superpower of being satisfyingly cocky). And there's even someone with an identity crisis because all he knows how to do is steal everyone else's powers!

Keep Your Friends Close... - In between battles, players will have the option to chat with teammates and develop closer bonds with them. Juggling these friendships and keeping track of who participates in battle will be the key to sussing out the traitors and assuring that, by the time you reach The End, it won't be... the end... for you and your allies!

Ghostlight is bringing Lost Dimension to Steam later this year

Lost Dimension gets another character trailer and more screenshots 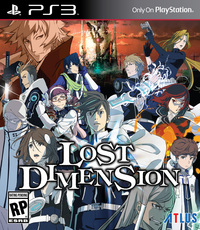