Pokemon HeartGold and SoulSilver have sold 1,480,980 units in their first week of release over in Japan - an impressive launch considering that these are remakes of older Pokemon games and in fact not all-new games.

Even more interesting the games were released on a Saturday - different from the Japanese norm - meaning that the games had only 2 days to track on the chart. 1.5 million in two days - not too shabby.

Pokemon Gold and Silver were originally released on the Game Boy in 1999, and this release finally allows every single version of Pokemon to connect to each other, with GBA and DS remakes of the first two titles in the series that were previously excluded from connectivity.

Japanese retailers are reporting sell-outs across the board and are awaiting more shipments from Nintendo. 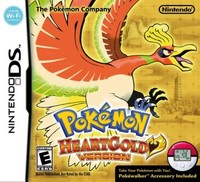