Calling: Characters sing various tunes throughout battle to create an area-of-effect aura known as an Ensemble Ring and any character inside this zone will have their attacks and abilities buffed. Multiple Ensemble Rings can be stacked in order to boost the bonuses given; effects start off in a Solo state which can be amplified through a Duet, Trio, or Quartet ensemble.

Duo Strike: A strong attack that mixes together the Arts of two characters. Its properties conform to the enemy's weakness when initiated.

Lapis Burst: An extremely powerful attack unique to each character in the game. Different attributes accompany each of the heroines' Lapis Burst attacks to completely demolish enemies.

Produce Plan: Players level up and learn new skills for each playable character through a skill tree using Aura Points. By developing a character's Pure, Variety, Cool, and Beauty traits, players will be able to customize each character's play style and role in battle.

After Break: After battle, players return to a peaceful hub area with their allies. Players can grow closer and expand their relationships with the other heroines with Break Points. These points are consumed by choosing various dialogue options when spending time with them.

Luminous Arc Infinity is coming to the Playstation Vita on August 6 for 6,800yen in Japan. 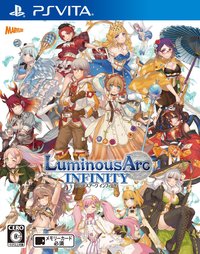