Divinity: Original Sin heads to consoles with an Enhanced Edition

The publisher promises that more details will be revealed over the coming months and that Divinity: Original Sin - Enhanced Edition will be at their E3 booth. Check out the announcement trailer below.

Easing a new generation into the world of cRPGs, Original Sin - Enhanced Edition features isometric, party-based gameplay, turn based combat in a story that will have you embroiled in a fantasy world of free exploration thanks to a new split-screen friendly UI. 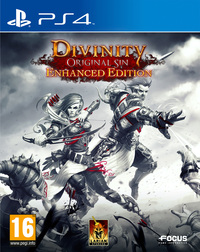