Aside from using the same engine that powers Monster Hunter 4 Ultimate, the gameplay will be more action-oriented this time around similar to the Frontier subseries of online games.

Not much more details have been revealed other than a Winter 2015 release frame, but you can check out the debut trailer for the Nintendo 3DS title below taken from the recent Nintendo Direct that aired earlier today. You can also take a gander at the official website. 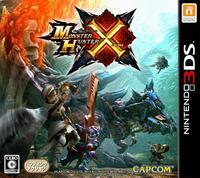