Instead of firing Truth Bullets to identify suspects of mysterious murders, players take up arms with Komaru Naegi and Toko Fukawa to fight their way out of a despair-filled city. Komaru's megaphone has the ability to develop Truth Bullets to eliminate enemy Monokumas along with a host of other abilities to inflict foes with status ailments. Meanwhile, Toko utilizes a stun gun to access her inner psycho, Genocider Jack, to get up close and personal with any opposition that stands before players.

NIS America also announced a Limited Edition of Danganronpa Another Episode: Ultra Despair Girls a few days ago. Check out the the new trailer below and gallery for English screenshots of the game in action.

Update: Europe's Playstation Blog has revealed that Danganronpa Another Episode: Ultra Despair Girls will arrive in Europe on September 4. 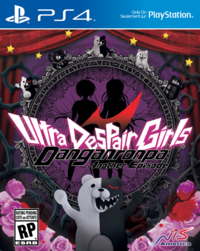